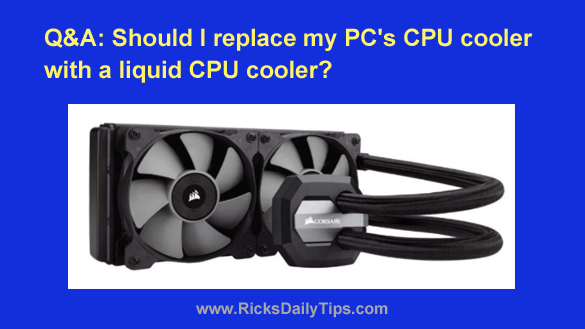 Question from Alice:  I bought a new HP desktop computer with Windows 10 and an Intel Core i5 CPU.

Overall, I really like this computer and I want to do everything I can to make it last as long as possible.

I’ve read that keeping a computer’s CPU cool can prevent it from over-heating and failing prematurely and that a liquid CPU cooler does the best job at that.

I want this computer to last as long as possible so I’m thinking about having my computer guy replace the existing CPU cooler with a liquid CPU cooler to keep the CPU as cool as possible while the computer is running.

I use this machine primarily for Internet (mostly Facebook and Pinterest) and watching Netflix as or playing an occasional game of “Words with Friends”.

Do you think that’s a good idea to replace the CPU cooler? END_OF_DOCUMENT_TOKEN_TO_BE_REPLACED

Question from Benji:  I decided to try my hand at building my own PC so I bought the parts from Newegg, and as soon as they arrived I carefully put them together with my nephew’s help. Everything worked fine, but the case was to small for my chosen video card to fit comfortably within it.

I bought a larger case and transferred the components from the old case into it, then powered it up. Everything seemed fine for several seconds but then I got a CPU heatsink error. I double-checked everything, and I can’t find anything wrong.

Any ideas about what to look for? I’d hate to have to send everything back! By the way, the heatsink/fan is a Cooler Master Hyper 212 Plus.