You are here: Home / Tech Questions & Answers / Q&A: Can I safely rely on System Restore as my Windows backup tool?
1.5k
SHARES
ShareTweetSubscribe 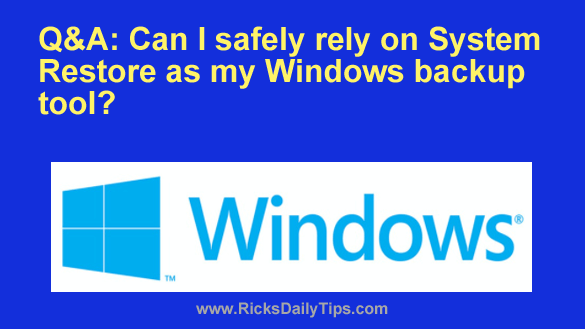 Question from Mike:  I install lots of free software and I always create a new System Restore Point before installing a program just in case something goes wrong.

I think Windows is great, but as you know, things do go wrong sometimes.

My boss told me that relying on System Restore for my backups isn’t good enough. He said I need to create System Image backups too, but I think that’s overkill.

What’s your opinion on this?

Rick’s answer:  I’m afraid I have to agree with your boss on this one one, Mike.

I definitely agree that System Restore is awesome – when it works.

The problem is, it doesn’t always work, for a multitude of reasons.

That’s why I strongly recommend that you also create regular System Image backups to augment your frequent use of the System Restore tool.

Here are a few things to consider:

1 – System Restore only backs up critical system files, not your user data such as photos, music, Office files and such.

2 – As mentioned above, System Restore can and does fail sometimes.

If something goes wrong and you’re unable to recover from a good Restore Point, you’re toast if you don’t have an alternate form of backup available.

3 – If the hard drive containing your Windows installation goes bad, you’ll lose your System Restore Points too since they’re stored on that same drive.

4 – The System Image backup tool backs up everything on the drive, not just the critical system files and settings.

It basically makes an exact copy of the drive’s current state which makes it very easy to recover in case of a hard drive failure or a corrupted Windows installation.

5 – Since System Image backups are typically stored on an external drive you won’t have to worry about losing your backup to the same drive failure that wipes out your PC’s boot drive.

Bottom line: You can usually rely on System Restore to recover your system from issues that might arise day to day, but creating regular System Image backups will ensure that you’ll also be able to recover from a catastrophic Windows corruption or hard drive failure.

You’ll find instructions for creating System Image backups in your Windows version in these posts.