You are here: Home / Computer Tips / How to check the true speed of your Internet connection
2k
SHARES
ShareTweetSubscribe 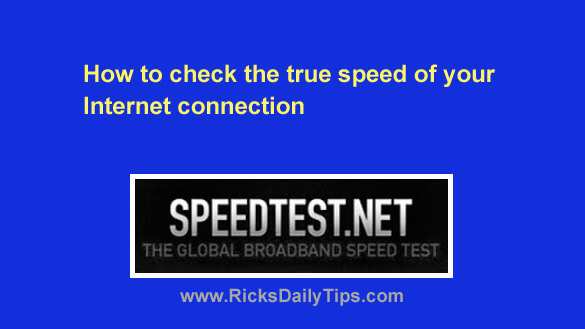 Is your Internet connection really as fast as your ISP claims it is?

In reality, the answer should be yes (or at least fairly close).

Since there are many factors that affect the average speed of a typical high speed Internet connection, it’s unlikely that your actual upload and download speeds to will match your plan’s advertised speeds exactly.

But that being said, there shouldn’t be a whole lot of daylight between the two.

A fantastic website called SpeedTest.net will put your Internet connection through its paces and calculate your true data transfer speeds in both directions.

These calculations are based up on real-world tests in which sample data files are first downloaded from a distant server and then uploaded back.

Running the speed test on your own Internet connection is easy. All you have to do is head over to www.speedtest.net and click the big Go button.

When the test is complete you’ll see the results right on the screen. If you want, you can then click the Go button again to run a second follow-up test.

Important: In order to get accurate results from the speed test you’ll need to make sure that the computer or mobile device you’re using to conduct the test is the only device that’s actively using your Internet connection.

If other devices are using the Internet while the test is in progress it will alter the results.

Note: You don’t have to physically disconnect your other devices from your router. You can either temporarily turn them off or put them in Airplane Mode.

Depending on the actual networking adapter(s) installed on the device, either the wired Ethernet connection or the WiFi connection will likely be a lot faster than the other.

That’s all there is to running the tests. If the speeds returned are considerably lower than the speed you’re paying for you should ask your ISP to send a tech out to fix the issue.