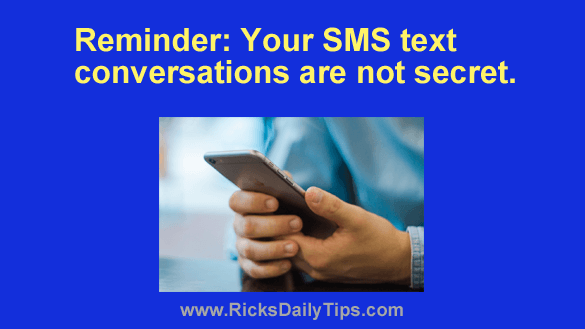 If you’re one of them you might be surprised to learn that the content of your texts are wide open to anyone who manages to intercept them, and that’s incredibly easy to do.

Truth be told, there are LOTS of folks out there who can, and do intercept SMS text messages, and as the article I linked to above explains, it isn’t limited just to law enforcement.

That’s why it’s wise to assume that anything you send or receive in an SMS text message can (and well well might) be intercepted and viewed by a wide range of third-parties.

If you ever send or receive text messages that contain information that you wouldn’t want anyone other than the recipient to see, I strongly recommend that you stop texting and start using one of the secure messaging apps that are available today.

For example, there’s Signal, a very popular app that sends all messages with end-to-end encryption.

No one will be able to read your Signal messages – not even Signal employees.

Just be aware that the person you’re sending messages to will need to be using Signal as well in order for the conversation to be encrypted.

Next, there’s WhatsApp, one of the most popular messaging services around.

Like Signal, WhatsApp encrypts all of the messages they send end-to-end.

And finally, there’s Messenger, the uber-popular messaging app from Meta, the parent company of Facebook.

Unlike Signal and WhatsApp, messages sent via Messenger aren’t encrypted by default (although that will supposedly be changing relatively soon).

However, you can easily turn on end-to-end encryption for a Messenger conversation. Just follow the steps below:

2 – Tap the New message icon (it looks like a pencil).

3 – Tap the Lock icon to turn on end-to-end encryption.

4 – Select the recipient for your message.

5 – Type your message and then tap the right-facing arrow to send it.

Bottom line: SMS text messages are extremely insecure. Luckily, there are several secure messaging options available to you and the people you converse with.