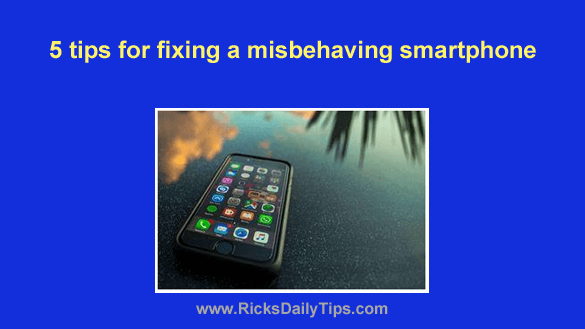 It’s no secret that smart phones have literally changed the way most of us live our lives.

They allow us to make phone calls and use the Internet from most anywhere, and the list of devices they can replace by simply installing an app boggles the mind.

Unfortunately, like other computers a smartphone can get bloated and inefficient over time as you add more and more apps (some of which can conflict with one another) and its internal storage gets clogged up with digital clutter.

And even worse, malware can also be a concern!

If your phone is running slower than it used to or if it’s freezing up or and/or doing strange things, there are several things you can do to try to get it back into working order:

1 – The first thing I always recommend is shutting the phone down completely and rebooting it. That will clear everything out of the phone’s RAM and allow it to start a new computing session with a blank slate.

2 – The next thing I recommend is to carefully review the list of installed apps and uninstall every app that you never use and/or don’t remember installing in the first place.

Although you won’t be able to uninstall most apps that came pre-installed when you first bought the phone, you can easily uninstall any apps that were installed after you got it.

The pre-installed apps that you can’t delete can be disabled.

3 – Next on the list is to install and run a good “cleanup” app on the device.

There are several really good cleanup apps available for Android phones, but the one I use and recommend is 1 Tap Cleaner. If you have an iPhone you’re in luck because you don’t need a cleanup app on it.

4 – After you get all the junk cleaned out of your phone it’s time to think about antivirus protection.

If you have an iPhone you won’t really need to worry about viruses for the reasons mentioned in this post.

However, it’s a different story if your phone is an Android device.

Google has built Android from the ground up to be a more open and versatile operating system than iOS, and being the geek that I am I really like that.

But unfortunately, all that openness and versatility makes Android devices just as susceptible to viral infections as Windows PCs.

Luckily, there are several good antivirus apps available in the Google Play Store. The one I use and recommend is AVG for Android.

5 – If none of the steps listed above put a stop to the issue(s) you’re having you’ll probably need to reset your phone back to its factory default settings.

A factory reset is sometimes referred to as the “nuclear option” because it completely wipes out everything on the phone and installs a fresh copy of the operating system.

That means you’ll lose all of your photos, contacts and other user-created content unless you have backed it up to the cloud or copied it onto another device before-hand.

You’ll also need to re-install all of your apps from the app store.

For these reasons you should only consider doing a factory reset if nothing else you tried worked.

The good news is you probably won’t have to since the steps listed above typically resolve most issues.

If you decide to move ahead with a factory reset you’ll find instructions for completing the procedure in your phone’s user manual.

If you no longer have your phone’s manual let me know and I’ll help you track down the instructions.

Bottom line: You don’t have to live with a sluggish smartphone that’s acting like it has a mind of its own. You’ll likely be able to clear up most any issue you’re having by following the steps listed in this post.