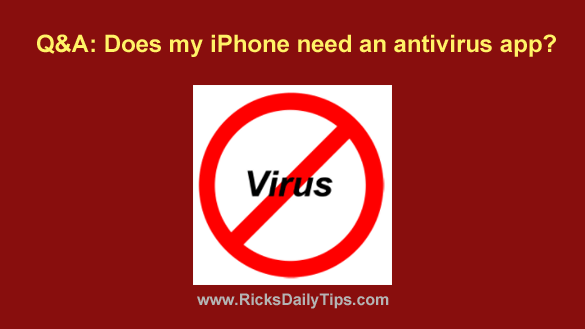 Question from Lilly N.:  Hello, Rick. I just have a very quick question.

Do I need to install an antivirus app on my iPhone?

One friend says I do and another friend (who I tend to trust more lol) says I don’t.

I’d really like to know for sure so I can make sure my phone is protected. I just don’t want to install another app if I don’t need it.

But if I do need to install one, which one would you recommend?

Thanks for your help.

Rick’s answer:  Lilly, this question has been asked many times, and the short answer is no, you don’t need to install an antivirus app on your iPhone.

If you’re interested in the technical details of why that is, this excellent post from the folks at Tom’s Guide lays them out quite well.

If an abbreviated explanation will suffice, it’s because iOS (your iPhone’s operating system) forces the apps running on the device to run in a way that isolates them from the operating system itself. That makes it extremely difficult for a malicious app to take control of your phone.

I’m not saying that it’s impossible for your iPhone (or any other iOS device for that matter) to catch a virus.

After all, any computer can potentially be attacked by malicious code, and an iPhone is simply a very small computer at its core.

What I’m saying is the risk of an iPhone catching a virus is so small that it makes little sense to run an antivirus app on one.

There is one caveat to be aware of however…

If you ever decide to “jailbreak” your iPhone, iPad or other iOS-based Apple device the built-in protections that lock down your device and protect it from viruses will be rendered ineffective.

This is one of the many reasons why I NEVER recommend jailbreaking an iOS device.

Bonus tip: Even though your iOS devices don’t need an antivirus app, Macs do!