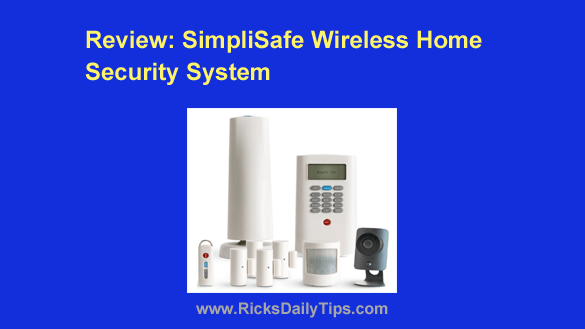 It’s no secret that we live in a dangerous world.

Sadly, burglaries and home invasions have become commonplace in recent years, and the problem seems to be getting worse instead of better.

Several major companies have been providing homeowners with home security hardware and monitoring services for decades, but the solutions they offer tend to be on the expensive side.

What’s more, most of them require professional installation.

A while back I started seeing advertisements for SimpliSafe, a “Do-It-Yourself” security system that doesn’t require professional installation. I decided to check them out, and for the most part I was quite impressed. This is what I learned…

SimplySafe’s ads prominently claim that anyone can install their security systems and avoid having to pay a pro to install it for them. That turned out to be true, basically because everything is wireless.

There are no holes to drill and no wires to run. Simply determine the best location for the sensors, the camera, the keypad and the base station and you’re all set.

All the components in this system can literally be installed in minutes without the use of tools if you choose to mount them with the included sticky tape instead of screws.

One note about the included screws: They are tiny! If you decide to mount any of the sensors with screws, I recommend picking up some larger screws at your local hardware store. Replacement screws will only cost you a few cents and your sensors will be mounted much more securely.

With the exception of the sensors, you don’t have to “mount” the devices at all if you don’t want to. You can simply set them wherever you want them since they all come equipped with a sturdy base.

Nothing in the SimpliSafe kit needs to be programmed as everything is pre-programmed to work together at the factory.

Your SimpliSafe system is protected by a 4 digit pin that you will enter every time you return to your home. The default pin is 1234, but I strongly recommend that you change your pin immediately after you finish installing your security system.

Unlike traditional security systems, all SimpliSafe security devices are wireless. That means a criminal won’t be able to cut a landline phone connection and prevent the base station from calling in to alert the monitoring service that there’s a breach at your home.

All SimpliSafe base stations “call in” to the monitoring center via a cellular connection. That ensures that your home will be monitored 24/7 even when your power is out and the local landline phone system has been disrupted.

Depending on where you live, your SimpliSafe system will use either the Verizon or T-Mobile cellular network. SimpliSafe has created this handy tool to help you determine which of these carriers serves your location.

The free SimpliSafe mobile app will let you control your home security system from anywhere in the world using your iPhone/iPad or Android device. You can also use the app to watch live video of your home as it is captured by your SimpliSafe camera.

The SimpliSafe base station plugs into a standard electrical wall outlet, but it also has a built-in battery backup that will keep the base station powered up and working for about 8 hours after your power goes out.

All the other SimpliSafe devices are powered by lithium batteries that typically last up to five years.

SimpliSafe Home Security Systems are purchased as kits, and the kit you choose will contain a base station, a keypad, a remote and at least one sensor. Some kits also include a SimpliSafe camera and multiple sensors.

If you install a SimpliSafe security system and later determine that need you more sensors, you can purchase them separately.

The SimpliSafe base station has a built-in siren, but if you need something that’s considerably louder you can always add a SimpliSafe 105 Decibel Auxiliary Siren.

The hardware components in all SimpliSafe kits are covered with a three year warranty.

Without a doubt, SimpliSafe’s security systems are the easiest to install of all the major providers. And with remote monitoring starting at only $14.99 per month, it’s a true bargain.