You are here: Home / Computer Tips / Always scan your PC for malware before taking it to a repair shop
566
SHARES
ShareTweetSubscribe 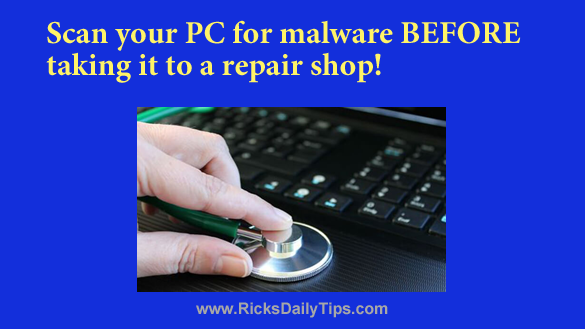 As you probably know, malware infections can cause all kinds of strange problems on Windows PCs.

That’s why if your computer starts acting strange all of a sudden it could very well be infected with a virus or some other form of malware.

Most malware infections can be removed by first running a thorough series of scans with the free tools mentioned in this post, but there are some strains of malware that might need to be removed by an experienced computer tech.

I recommend that you always run your own malware scans (if it’s possible to do so) before you take your PC to a repair shop for ANY type of service or repair, even if you don’t believe the issue is malware-related.

The reason I recommend running that pre-service malware scan is so you’ll know what to expect when you receive a report from the repair tech.

The vast majority of computer shops and techs are honest and trustworthy, but as with every other profession there are a few bad apples out there.

Truth be told, malware can easily be blamed for problems (or blamed for adding to problems) that don’t really have anything to do with malware at all.

What’s more, even if malware never existed on your machine you’ll have no way to prove otherwise if a tech says it did.

Want proof? A few years back Office Depot/Office Max was fined $25 million for charging millions of customers $180 each for removing malware from their PCs when malware was never on the PC in the first place.

Hopefully they have learned their lesson, but who knows?

Again, I honestly believe that most computer techs are trustworthy, but you can at least partially protect yourself from the few bad apples by simply running your own malware scans before you hand your machine over to them.

If those scans do find malware but you can’t seem to get rid of it, you can give that info to the tech so he/she will have a heads-up about the situation.

If the scans don’t find any malware you can tell the tech which scans you ran and that no malware was found. That info will let the tech know that you’re an informed user and you won’t be easily scammed.

Like they say, “trust, but verify”, and the best way to verify that malware isn’t what’s causing your computer’s problems is to run your own series of malware scans BEFORE you take the machine to a repair shop.

And now, one final thought…

There’s always a good chance that your malware scans might fix the problem you’re having, mitigating the need to take your machine into the shop in the first place. Just sayin’.

Note: As always, you can watch the video at full screen by clicking the “square” icon that will pop up in the lower-right corner of the video after it begins playing.