You are here: Home / Tech Questions & Answers / Q&A: How do I remove a Google account from my Android phone?
889
SHARES
ShareTweetSubscribe 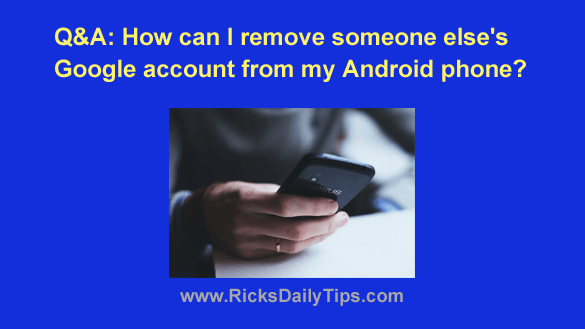 Question from Laurie:  My daughter lost her phone and she had to wait till she got paid before she could buy a new phone, so I let her borrow mine for a couple of days.

After she bought herself a new phone she gave mine back to me.

I just discovered that she added her own Google account to my phone (she said she wanted to download an app she needed to use without me having to pay for it).

How can I remove my daughter’s Google account from my phone? I can’t figure it out and she won’t be back to help me for another two weeks!

Rick’s answer:  This situation is just one of the many downsides of loaning your phone to someone, Laurie. But then this is your daughter so I don’t blame you for loaning it to her. I would have done the same thing.

Luckily, it’s pretty easy to remove a second Google account from an Android phone. Just follow the steps below:

Note: You didn’t mention the brand and model of your phone or the version of Android that’s running on it. That means the actual steps to remove a Google account from your particular phone might vary a little from the instructions below. If so, just use the following procedure as a general guide…

2 – Scroll down and tap Accounts. You should now see your daughter’s account listed along with your own.

That’s all there is to it. Your daughter’s Google account should no longer be attached to your phone.