You are here: Home / Computer Tips / Protect your sensitive data by travelling with a Chromebook
533
SHARES
ShareTweetSubscribe 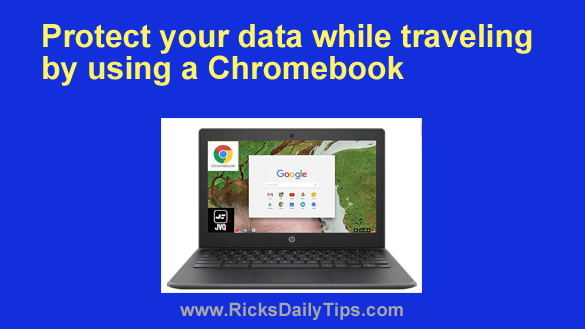 Do you travel often for either work or pleasure?

If so, you probably worry about the possibility of a thief absconding with your laptop along with all the sensitive data that’s stored on it.

And that’s indeed a real concern since most Windows PCs, by default, do a poor job at protecting stored data from prying eyes – even if the machine is protected with a password or PIN.

You can get yourself a Chromebook and use it as your travel laptop instead of your regular Windows laptop.

As you might already know, Chromebooks are encrypted by default so what little actual info that’s stored on it is accessible only to you.

What’s more, Chromebooks store the vast majority of your information on Google’s encrypted servers so that info will remain protected as well.

In a nutshell, a thief won’t have access to any of your private information whatsoever as long as the machine is protected with a strong password or PIN.

That means if your Chromebook ever gets stolen all you’ll really be out is the cost of the hardware itself since the thief won’t be able to access any of your sensitive information.

Chromebooks also have the advantage of being smaller and lighter than typical Windows laptops, making them easier to carry around as you travel hither and yon.

And there’s still another important advantage to using a Chromebook…

How cheap are they? As you can see right here, some models cost less than $200!

Bottom line: You’ll be able to breathe a lot easier while you’re traveling if know you the data on your laptop isn’t going to fall into the hands of a thieving hacker.

Using a Chromebook while you’re “on the road” can give you that peace of mind.