You are here: Home / Tech News / (Rant alert) Why do we still have so much trouble out of our printers?
1k
SHARES
ShareTweetSubscribe 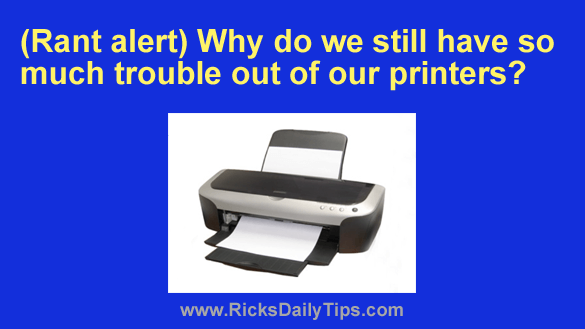 I receive dozens of questions every week via the Tech Q&A page on my blog, and many of those questions are about printer issues.

“I need help with my printer. It was working fine until this morning but now it’s just printing blank pages! What could be the problem?”

Most printer problems can be easily solved, but it can be difficult for the average user to know how to begin troubleshooting an issue.

All a frustrated user typically knows is “My printer isn’t working. I wonder what’s wrong?”

At their most basic level, printers are actually fairly simple machines. Your computer or mobile device sends a “print job” to the printer and the printer puts that info on paper for you.

Back in the good ole days of “DOS” (i.e. before Microsoft Windows took over the world), printer issues were few and far between, and the vast majority of the issues that did pop up were hardware related (the ribbon ran out of ink, the paper got jammed or the printer hardware itself developed a problem).

Then along came Windows and things immediately became a lot more complicated.

That interaction between the operating system, the apps and the hardware driver allows modern printers to do some pretty amazing things. But unfortunately, it also makes it a lot easier for something to go wrong.

Most printer problems these days occur when there is some sort of mix-up in the communications between the computer’s operating system, the app doing the printing, and the printer. In other words, a software issue.

Anything from a missing or corrupted printer driver to an incorrect setting can throw the entire printing process completely out of whack. And in my opinion, it shouldn’t be that way.

Computers and printers have been in use for decades now, and they have evolved into very sophisticated machines over time.

There really should be no acceptable excuse for a functional printer to not be able to print a document on demand, especially if that same document type had already been printed by that printer before.

If a printer driver becomes corrupted or gets accidentally deleted, the computer should be able to recognize that issue and correct it on the fly.

Likewise, if an incorrect setting prevents a document from being printed correctly, the computer or printer should be able to tell the user exactly which change(s) need to be made to correct the issue (especially if that same type of document had been printed before).

Bottom line: Most computer users aren’t computer techs, and they shouldn’t have to be. After all these years printer issues should be more or less self-healing. Just my 2 cents worth…

Do you agree, or am I way off base?

Bonus tip: On a related note, why do computers still crash all these years? I have a few thoughts on that as well.