You are here: Home / Tech Questions & Answers / Q&A: Is it safe to plug a 300W inverter into my car’s cigarette lighter socket?
657
SHARES
ShareTweetSubscribe 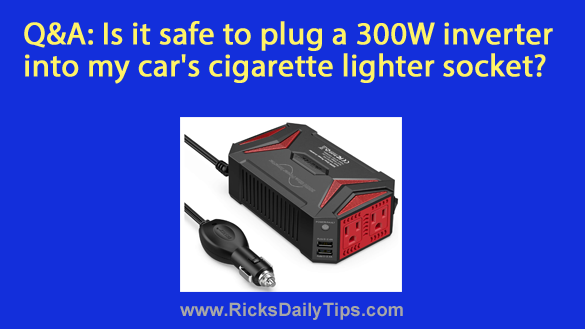 Question from Carl:  I bought this 300 watt 12VDC to 120VAC power inverter to run my coffee pot and a couple of other items while I’m camping.

While I was researching a related topic online I found a couple of articles that said not to plug an inverter larger than 200 watts into a car’s cigarette lighter because it’ll burn the inverter up.

That’s a problem because the inverter I bought only came with a cigarette lighter plug. You can’t remove it and there’s no place to plug in cables that can connect it directly to the battery.

What I need to know is will my 300W inverter really burn up if I plug it into my car’s cigarette lighter socket?

Rick’s answer:  Carl, the info in those articles is mostly off the mark, but their warning does bring up an important issue that you need to be aware of.

First, let me put your mind at ease about the possibility of your inverter “burning up” if you plug it into your car’s cigarette lighter socket (now commonly referred to as the “auxiliary power outlet” or “accessory outlet”). It won’t.

The only thing that will happen if you overload the circuit is the fuse protecting the cigarette lighter socket will blow. That’s really no big deal because you’ll be right back where you started after you replace the blown fuse.

The 300 watt rating on your inverter means the inverter itself can safely supply a steady flow of 300 watts of power to the device(s) that are plugged into it.

The thing is, the power rating of the inverter has no effect on the amount of power your car’s cigarette lighter socket can supply to it.

Let’s do a little math…

Your car’s battery should supply somewhere between 12 volts and 14 volts, depending on the charge level of the battery and whether or not the engine is running and actively charging the battery.

The cigarette lighter sockets in virtually all vehicles are protected by fuses that are rated at 15 amps or less. If the current drawn by the device(s) that are plugged into that socket ever exceed the amperage the fuse is rated at, the fuse will blow.

Since wattage equals voltage times amperage, we can easily calculate the maximum wattage that the cigarette lighter socket can supply without blowing its fuse.

For our little math problem, let’s use 13 volts (which is right in the middle of the 12V to 14 volts battery voltage range) and 15 amps…

That means the maximum power that can be supplied to the device(s) that are plugged into the inverter is a little less that 200 watts. Anything over that amount will cause the fuse protecting the cigarette lighter socket to blow.

And truth be told, the wattage the device(s) plugged into the inverter can actually draw is actually even less since the inverter itself will consume a small portion of the available power.

A good rule of thumb is not to plug any device(s) that consume more than 150 watts total into your inverter because you need to leave a little breathing room for the initial current spike that occurs when many devices are first turned on.

Note: The calculation we performed above assumed the fuse is rated at 15 amps. If the fuse in your vehicles is rated at a lower amperage, that will reduce the amount of wattage your devices can consume accordingly.

But that being said, 150 watts should be a usable amount of power in the vast majority of situations.

Now, back to the good news…

You can safely plug your 300W power inverter into your car’s cigarette lighter socket. Just make sure the devices you plug into the inverter don’t consume more that 150 watts in total.

And finally, back to the first bit of good news I mentioned above…

If you do accidentally plug something in that causes the fuse protecting the cigarette lighter socket to blow, don’t panic. Simply replace the blown fuse and all will be fine.