You are here: Home / Tech News / Warning: Photos sent via Snapchat can easily be saved and shared!
2.1k
SHARES
ShareTweetSubscribe 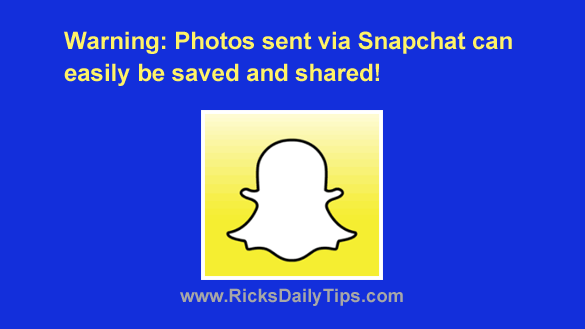 Snapchat has quickly become one of the most popular social networking sites on the web thanks to its “disappearing photos” feature, and it is especially popular among teenagers.

If you aren’t familiar with how Snapchat works, it lets you send a photo to a friend that will only remain on his/her screen for a given length of time, then it disappears.

That means you can share potentially embarrassing, or even incriminating photos with your friends with no risk attached, right?

Actually, nothing could be further from the truth.

First of all, the recipient(s) can easily take a screenshot of your photo before it expires and disappears.

The official Snapchat app will notify you that your friend took a screenshot, but there are third party apps that let users bypass the screenshot notification.

This means that any “personal” photo you share over Snapchat is subject to being captured, and then shared all over the web – and you might not even know about it.

And here’s another thing to consider: Photos shared via Snapchat can remain on Snapchat’s servers for up to a month as long as they haven’t been opened by the recipients, and Snapchat can and does share unopened photos with law enforcement when ordered to do so by a court order.

And guess what? There’s an even easier way to capture a permanent copy of a Snapchat image…

The recipient can simply photograph your picture the old-fashioned way by taking a photo of their screen with a regular camera – or even another smart phone.

The bottom line is pretty simple: Despite the wide-spread belief to the contrary, there is no truly safe way to send a potentially embarrassing photo to someone else via Snapchat.