You are here: Home / Tech Questions & Answers / Q&A: What is overclocking (and can I do it to my laptop)?
900
SHARES
ShareTweetSubscribe 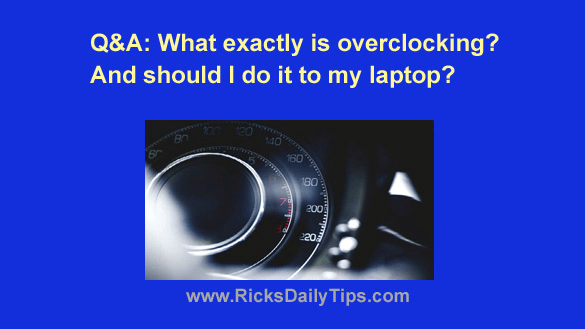 Question from Brenda:  I heard a couple of kids talking about overclocking their computers to make them run faster.

What exactly do they mean by overclocking? And it that something that I can do to speed up my HP laptop?

It’s a pretty slow machine and I’d love to overclock it if you think it’s would really help.

Rick’s answer:  I’ll be happy to give you a quick explanation of overclocking, Brenda. And a recommendation as well.

In a nutshell, overclocking simply means running a computer’s CPU and various other components at faster clock speeds than the devices are rated at.

Overclocking any device does make it run faster, and if done correctly the speed boost can be substantial.

However, the above being said, overclocking is both difficult and dangerous for someone who doesn’t know exactly what they’re doing, for the following reasons:

1 – Overclocking any device will cause it to operate at a higher temperature than it’s designed to operate at due to the faster clock speed. The faster the device operates the more heat it will generate.

If enhanced/extra cooling methods aren’t used the device can (and probably will) overheat and fail to operate correctly.

In a way, overclocking a computer is sort of like running a car engine at an RPM that exceeds the highest RPM deemed safe by the manufacturer. Yes, you can lean on the gas pedal and turn most any passenger car into a screaming demon, but you’re likely to blow the engine in the process.

2 – Even if enhanced cooling methods are in place (and effective), overclocked devices can still be unreliable, causing the machine to generate random errors or even freeze up completely. This is obviously less than desirable.

Now that the basics of overclocking are out of the way, I’ll answer your question about whether you should overclock your own HP laptop. Well, the short answer to that question is no.

I don’t recommend overclocking any machine unless it’s a desktop computer AND you fully understand the ins-and-outs of overclocking, which specific components can be safely overclocked and how to do it correctly.

What’s more, I don’t recommend overclocking laptops at all because their design pretty much prevents the addition of extra or enhanced cooling devices.

And finally, I’ll just say this…

There are plenty of folks who disagree with my views on overclocking, and that’s fine.

But those folks have lots of experience with computer hardware. They know which specific devices can be safely overclocked and how to go about overclocking them in a safe, yet effective manner.

Bottom line: You asked for my opinion on whether you should overclock your laptop, and here it is: I strongly recommend that you not even attempt it.