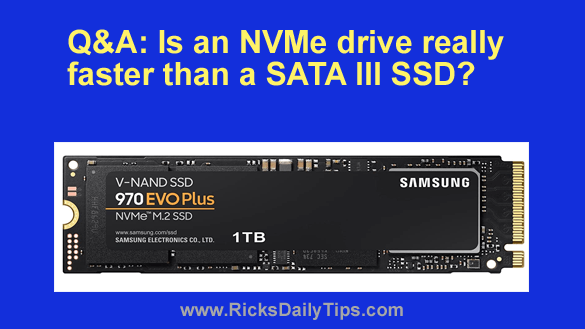 Question from Norbert:  I just ordered an Intel i7 CPU and ASUS gaming motherboard combo that supports both M.2 NVMe and 2.5″ SATA III drives.

Now I’m trying to decide on an SSD for it.

I know NVMe drives are a lot faster than SATA III drives, but I recently read that using an NVMe drive in a gaming PC will actually slow it down because it’ll clog up the PCI lanes, so it’s better to use a SATA III drive.

Is there any truth to that? I want to use the SSD type that’ll run fastest in my new gaming rig.

Rick’s answer:  Norbert, I’m not sure where you read that claim that it’s better to use a SATA III drive than an NVMe drive, but it’s simply not true.

Truth be told, any NVMe you can buy will make your gaming rig perform better than any SATA III SSD.

Yes, NVMe drives transfer their data directly via a PCI bus (that’s why NVMe is so much faster than SATA III), but it won’t clog up the system and make it run slower.

This is easy to test and verify if you wish. Simply install both an NVMe drive and a SATA II drive in your new PC and benchmark the the performance of both. You’ll find that the NVMe blows the SATA III drive out of the water.

Bottom line: Any time you have a choice between NVMe and SATA III drives, always choose the NVMe if system performance is your primary concern.