You are here: Home / Tech Questions & Answers / Q&A: Why does my Chromebook not have a ‘Delete’ key?
603
SHARES
ShareTweetSubscribe 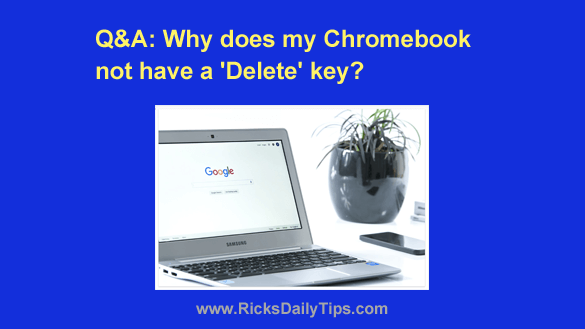 Question from Eugene:  I just bought a new Chromebook and to my amazement there is no ‘Delete’ key on the key board.

What’s up with that?

Rick’s answer:  Eugene, there are several things to love about a Chromebook (#ad), but there are a few things that make me want to scratch my head as well.

And you have just discovered one of them.

Google made the decision to streamline and slim down the Chromebook experience as much as possible, and part of that effort was reducing the number of keys on the keyboard to the bare minimum necessary to function as a modern laptop.

Unfortunately, one of the commonly-used keys they decided to jettison was the ‘Delete’ key.

Personally, there are other keys I would rather do without than the ‘Delete’ key, but things are what they are.

Luckily, Google does provide a way to delete the character after the cursor, but you have to press two keys instead of one…

The ‘Backspace’ key works the same as it does on Windows PCs and Macs. Pressing it will delete the character that’s located immediately before the cursor.

To delete the character that’s located immediately after the cursor you’ll need to press Alt+Backspace.

Yep, it’s a little clunky, but it works.

Bottom line: Overall, I think you’ll be happy with your new Chromebook once you get used to its unique quirks.

But I’ll admit that I never really got used to having to use Alt+Backspace in place of the ‘Delete’ key. It just seems so unnatural after having used other types of machines for so many years.