You are here: Home / Tech News / Is this the most important technological breakthrough of our lifetimes?
1k
SHARES
ShareTweetSubscribe 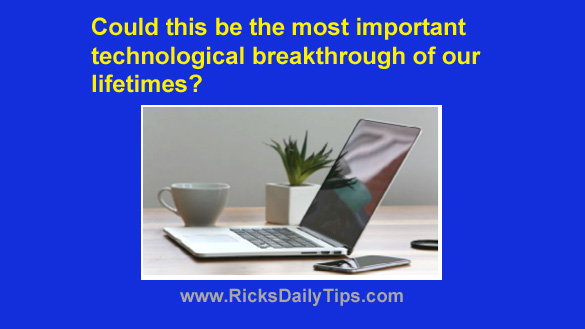 Computer technology has changed so much since the “stone age” of personal computing (circa mid-1970s).

Back then our mass storage options consisted of cassette tapes that were slower than ice melting and 8 inch floppy disks that held just a few kilobytes of data each.

Today we have hard drives than can hold several terabytes of data and solid state drives (SSDs) that can swap data in and out of a computer’s RAM at breathtaking speeds.

Throw in all the other advances like graphical operating systems, 64 bit CPUs and plug-n-play USB ports and you can see just how far we have come since those early days.

But of all the technological advances we have seen, I believe the proliferation of high capacity non-volatile flash storage has been the most important game-changer of all.

High-capacity flash memory allows us to carry mobile devices around in our pockets that contain many gigabytes of storage space. We now even have wrist watches that can store more data than the most expensive desktop computers you could buy at the turn of this century.

If you’re old enough to remember those bulky, yet tiny (in terms of capacity) 8 inch floppy disks of the 1970’s you can fully appreciate what this means.

Various types of flash memory devices (such as the trusty EPROM) were in use many decades ago, but their tiny storage capacities compared to the capacities of today’s flash memory chips made them impractical for use as mass storage devices.

What’s more, changing the data that was stored on an EPROM required removing it from the machine it was used in and shining ultra-violet light through a little glass window to erase the existing data, then placing the now-empty chip into an EPROM Programmer to write the new data onto it.

After this tedious and time consuming process had been completed the chip could then be re-installed in the machine so it could make use of the new data.

The later invention of the EEPROM made it possible to electrically erase the existing data instead of using ultra-violet light but they still had to be installed in an EEPROM Programmer to fill it with the new data.

And now, back to the present time…and a prediction:

I believe in the not so distant future we’ll have devices loaded with hundreds of terabytes of storage space to hold our photos, videos, music and other user files. Gone will be the days of having to delete apps and remove old files in order top make room for new ones.

Thanks to high-capacity Flash Storage devices, the future of technology is going be quite exciting to say the least.