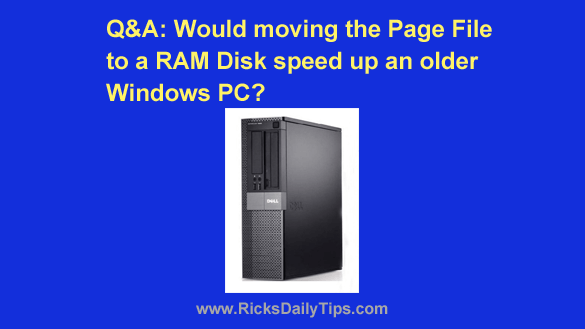 Question from Ethan:  I was reading an article last night that discussed using part of a computer’s unused RAM as a RAM Disk, and it got me to thinking.

I have a pretty old desktop computer that’s running Windows 7. It has 2GB of RAM and a 200GB hard drive.

This machine runs really slow, coming almost to a crawl at times. After doing some research I’ve determined that it’s likely sluggish because it’s doing a ton of swapping back and forth with the page file.

Do you think moving the Windows Page File to a RAM Disk would help speed it up?

Rick’s answer:  I know how frustrating a sluggish computer can be Ethan, and I certainly feel your pain. But I’m afraid the answer to your question is no.

The page file comes into play when Windows doesn’t have enough available RAM to load new data that it needs into RAM.

When the system RAM is maxed out, the operating system will move data that isn’t being used at the moment into the page file on the hard drive.

When it needs to retrieve data from the page file, it’ll move other unused data from RAM into the page file to make room for the required data, then re-load that needed data back into the now-empty portion of RAM.

As you probably realized after reading the last couple of paragraphs, moving the page file to a RAM Disk is counter-productive.

That’s because the RAM Disk itself gobbles up some of the available system RAM, leaving even less memory space available for Windows to work with. And that of course results in more Page File swapping.

If you were to create a RAM Disk and move the page file onto it, Windows would simply end up swapping data from one area of RAM to a different area of RAM.

Now, having said that, there are a few of things you can do to potentially speed up your computer if you decide to keep it instead of replacing it with a faster, more capable PC:

Simply doubling the RAM from 2GB to 4GB would almost certainly make a world of difference in your PC’s operating speed. And if possible, 8GB would be even better.

Just head over to Crucial.com and run their System Scanner tool. It’ll scan your system and tell you how much total RAM the PC can use as well as what types and configurations of RAM sticks you’ll need to purchase and install.

2 – Replace the hard drive with a Solid State Drive (SSD)

An SSD is much faster than a hard drive, and that speed difference alone will make your computer run faster by reducing the time it takes for the CPU to swap data into and out of the page file.

3 – Make sure your computer is completely free of malware.

Viruses, toolbars, adware and such can really slow a system down, and simply removing all that unwanted junk can make a world of difference when it comes to system speed.

This post explains how to find and remove every scrap of malware that might be on your PC.

Linux typically performs better than Windows on older hardware so you could likely speed things up a bit simply by installing Linux in place of the current Windows installation.

Besides, Windows 7 is no longer safe to use because Microsoft has stopped releasing security updates for it quite some time ago.

And now here’s one final thing to consider: Since your computer is ancient (in tech years of course), you might want to consider simply replacing it with a new one

Instead of spending $100 or more to have additional RAM and/or an SSD installed, you could apply that money to the purchase of a new computer. That would allow you to start fresh with the latest version of Windows and brand new hardware that’s made to run it as quickly and smoothly as possible.

Truth be told, this is the way I recommend that you go since Microsoft has stopped supporting Windows 7 with security updates and it’s now unsafe to use.

And finally, here’s one other great alternative: Add a few bucks to that $100 and get yourself a more modern (and much faster) refurbished computer.

Bottom line: While moving the Windows Page File to a RAM Disk won’t help speed up your older PC, you do have several relatively inexpensive (and even free) options available to you.