You are here: Home / Computer Tips / Don’t like the centered Taskbar in Windows 11? You can move it.
671
SHARES
ShareTweetSubscribe 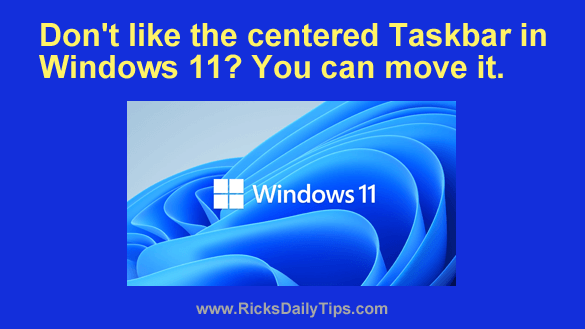 It’s clear that for the most part Windows 11 is simply Windows 10 with a fresh new coat of paint.

While I actually like a few of the minor changes Microsoft has made with the new Windows 11 interface, there is one that I really dislike: the centered Taskbar and Start button.

Windows 95 was the first version of Windows that was an actual stand-alone operating system instead of just a simple GUI shell that sat atop the underlying MS-DOS, and ever since its release way back in 1995 the Taskbar has been located at the left-hand side of the bottom of the screen with the Start button sitting right square in the corner.

And that’s where we long-time Windows users are used to finding them.

While there’s nothing inherently wrong with having those all-important tools centered instead of over on the left, it just doesn’t seem natural.

It’s a bit like an American who moves to Great Britain and has to immediately start driving on the left-hand side of the road (or vice versa for British drivers who move to the States). Yeah, you’ll eventually get used to it, but in the meantime it just feels really odd and uncomfortable.

Of course lots of folks love the new centered Taskbar as it makes the PC look and work a bit more like a Mac, but personally, I’m not a fan.

If you don’t care for it either you can easily move the Taskbar and Start button back to their traditional locations. Just follow the steps below:

If you prefer visual instructions, the short video below shows how to move the Taskbar to the left, step-by-step.


That’s all there is to it. Your PC’s Taskbar and Start button should now be right back where they’ve always been since the year 1995!
671
SHARES
ShareTweetSubscribe