You are here: Home / Tech Questions & Answers / Q&A: Do I need to run manual scans with my antivirus app?
523
SHARES
ShareTweetSubscribe 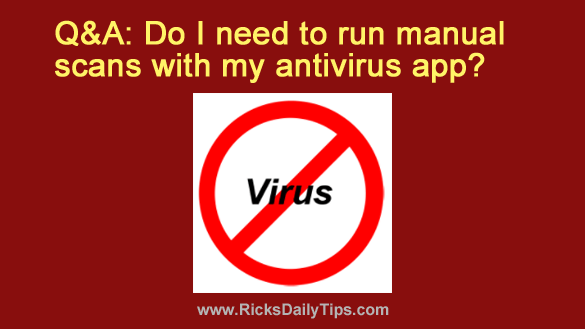 Question from Curtis:  I have my antivirus program set to run automatic scans on three nights each week (I read somewhere that three times a week is the best schedule to follow).

My question is will those three automatic scans be enough to protect my computer from viruses or should I run manual scans too just to be safe?

Computer techs have various opinions about this topic, but in my humble opinion the only time you really need to run a manual scan with your full-time antivirus app is after clicking on a suspicious link or visiting a sketchy-looking website.

And of course you should also run a manual scan if your computer suddenly starts acting really strange for no apparent reason.

Now that that’s out of the way, allow me to address the “three automatic scans per week” advice that you received…

I happen to think it’s wise to schedule nightly automatic scans with your installed antivirus app.

Why? Becasuse a virus or other form of malware can make its way onto your machine at any time, and 48 hours is plenty of time for the virus to root around in your system, steal your info and generally wreak whatever havoc it was designed to wreak.

After working to remove various malware infections for many years, I believe nightly scans are much more effective at limiting the damage caused by them.

Just as with a dangerous human virus, quickly ridding a computer of a digital virus reduces the potential for damage it can inflict on both the machine and the user’s life. Therefore, more frequent scans are better.

This is why I recommend getting a second opinion every now and then by running a scan with a good on-demand malware scanner.

For example, I run a manual scan with the free version of Malwarebytes on my PCs every Saturday night.

And finally, one more important tip…

As you probably noticed, I recommending getting a second opinion by periodically running a scan with an on-demand malware scanner, not a second full-time antivirus app.

Why? Because you should never run more than one full-time antivirus app at a time for the reasons explained in this post.