You are here: Home / Computer Tips / Why you should only run one antivirus app at a time
2.2k
SHARES
ShareTweetSubscribe 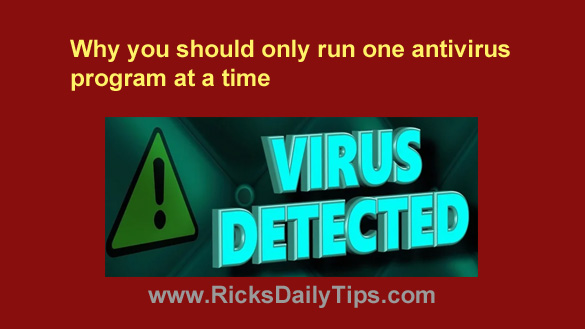 I’m often asked to remove viruses and other forms of malware from ailing computers, and many of those machines are running two or more antivirus programs at once.

The problem is, when it comes to antivirus apps, more is not better. I know that probably sounds like it can’t be true, but it actually is.

Before I discuss why that is, here’s a quick overview of the two primary types of anti-malware programs:

1 – Full-Time / Real-Time Protection – Antivirus programs such as AVG, Avast and others run continuously in the background, protecting your PC from threats on an ongoing basis.

It is essential to have ONE full-time antivirus app running at all times if you use your computer to connect to the Internet.

Note: You can also opt to stick with Windows’ own Microsoft Defender if you wish.

2 – On Demand – These anti-malware programs should be run periodically as a “backup” scanner to catch any nefarious code that might have slipped through the cracks in your regular full-time antivirus program (and they ALL have cracks).

The most popular on demand anti-malware program (and one I strongly recommend) is the free version of Malwarebytes.

Note: For more info on using on-demand malware scanners see the “Bonus tip” at the end of this post.

Whenever two full-time antivirus programs run at the same time they tend to fight one another, reducing your PC’s overall protection against viruses and other malware by a large margin.

In other words, ONE good full-time antivirus program will do a better job at protecting your PC from malware than any two of them combined.

My recommendation is to pick ONE high quality full-time antivirus program and go with it (personally, I use AVG), then run the free version of Malwarebytes about once a week to catch and remove anything that might have slipped in through the cracks.

Important: When you download the free version of Malwarebytes the installer will actually install a 14 day free trial version of the full-blown Malwarebytes Premium program, which runs full time to offer real-time protection.

After the trial period has elapsed the trial version will automatically revert to the free version unless you pay for the upgrade.

That means during the 14 day trial period Malwarebytes will be running full time. And as mentioned above, we don’t want that so I recommend temporarily disabling your full-time antivirus app during Malwarebytes’ trial period.

Bottom line: The combination of one full-time antivirus program supplemented by periodic scans with Malwarebytes will give you a high level of protection against viruses and other forms of malware.

Bonus tip: Every now and then you should seek a “second opinion” when your antivirus scan says your PC is malware-free. This post discusses seven easy ways to get that second opinion.