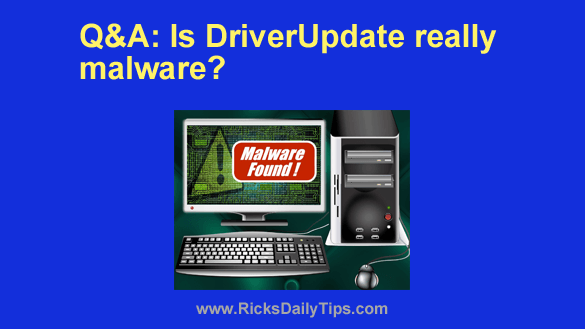 Question from Rhonda:  I bought a new laptop a while back and my son installed DriverUpdate by Slimware Utilities and several other programs on it to keep it running smoothly.

Everything was fine until the other day when I downloaded Malwarebytes.

Every time I run Malwarebytes it flags DriverUpdate as malware and tries to remove it.

Why is it doing this? Is DriverUpdate really malware?

I’m really confused and don’t know whether I should let Malwarebytes remove it or not.

Rick’s answer:  I can certainly understand your confusion, Rhonda. You’ve wandered into what is a murky situation at best.

DriverUpdate isn’t really malware in the classic sense (it isn’t on your system to purposely cause problems for you), but it is what’s commonly referred to as a “Potentially Unwanted Program”, or “PUP”.

Its primary purpose is to encourage you to pay for something that you can get for free (hardware driver updates).

PUPs are programs that are typically installed without the user’s knowledge or explicit consent, often as add-ons to other software installations.

However, some PUPs (including DriverUpdate) can also be installed intentionally by downloading them directly from the company’s website if you fall for their marketing spiel.

I could be wrong, but the result is the same either way.

Some PUPs (including DriverUpdate) are more or less benign, but others often contain viruses, spyware and/or other forms of dangerous malware.

While DriverUpdate is unlikely to cause any problems with your system, the fact is you simply don’t need it and you’d just be wasting any money you end up sending them at some point.

New hardware drivers can easily be found and installed manually whenever you need to install them, but you probably won’t ever need to because most computers work just fine for years without any major hardware driver updates.

Just always remember this: You don’t have to pay for driver updates because you can always download them for free as needed from the hardware manufacturer’s websites.

Bottom line: I recommend that you go ahead and let Malwarebytes remove DriverUpdate and not give it another thought.