You are here: Home / Scam alerts / Scam alert: These malicious apps could be stealing your Facebook login credentials
876
SHARES
ShareTweetSubscribe 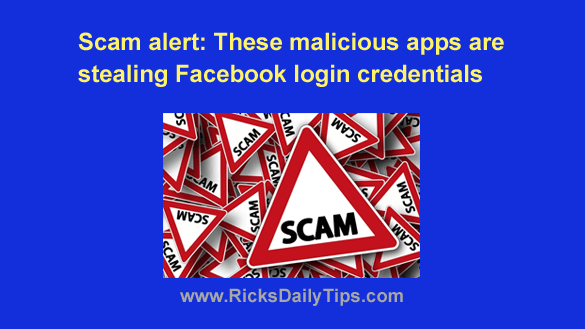 Regular readers of this blog know I often warn against installing apps from any repository besides the Google, Apple and Microsoft app stores because third-party app stores are typically riddled with malicious and malware-laden apps.

The big three mentioned above generally do a pretty good job at ensuring that the apps offered via their app stores are safe, but they are far from perfect.

To that point, a recent discovery by researchers for Dr. Web Antivirus has resulted in Google booting a total of nine malicious apps from the Google Play Store.

All nine of those apps ask users to log into their Facebook accounts via a malicious login process, during which the users’ Facebook login data is intercepted and stolen.

Although the apps are no longer available for download from Google Play, they still reside on millions of phones and tablets worldwide.

I recommend that you check your device’s list of installed apps to see if any of the apps on the list below are currently installed on it. If so, you need to uninstall it/them ASAP.

Here are the apps that were caught stealing Facebook login info:

Again, if one or more of these apps is currently installed on your device you need to uninstall it ASAP.

If you have ever had one or more these apps installed in the past it would probably be a good idea to change your Facebook password and then enable Two-Factor Authentication on your account.

Bottom line: While the vast majority of the apps found in the Google, Apple and Microsoft app stores are safe, there are never any guarantees, as this episode proves.

Just be sure to vet any apps you plan install as best you can. That’s about all you can really do.

And always remember this: Don’t install any apps from any third-party app store or repository!