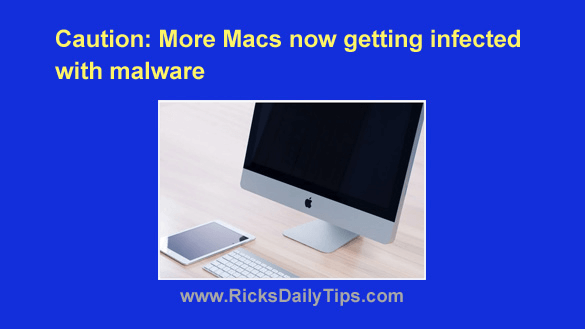 For years, Mac owners were led to believe that their computers were immune from malware infections.

In fact, if you asked them for an opinion on the best anti-virus protection, chances are the response would be “Buy a Mac”.

But the truth is Macs were never immune from “catching” malware at all.

The malware developers simply chose to concentrate their efforts on the much larger pool of Windows machines instead in an effort to get “more bang for the buck”.

Sadly, that’s no longer the case.

Several major computer security research firms are reporting that Mac malware infections are sharply on the rise, and on a percentage basis could even potentially exceed the number of Windows infections in the not so distant future.

Lots of folks believe that Macs are immune from malware, but they aren’t.

This false sense of security led to most Macs never having anti-malware software installed on them, therefore when a malware attack inevitably comes their way those unprotected machines become infected more or less by default.

That’s why I recommend that you start protecting your Mac with a good anti-malware program such as Malwarebytes anti-malware for Mac right away.

After all, as Windows users have known for decades, it only takes one malware infection to cause all kinds of grief.

Mac users are now being targeted by the same kinds of fraudulent emails that have been targeting PC users for years. Always be careful so you can avoid them whenever possible!

And now, one last thing for you to consider: Even if you’re careful about not clicking malicious links and you use anti-malware protection your Mac, there’s always a chance that it could still end up getting infected. That’s why I recommend always having a recent backup on hand.

This post explains how to back up your Mac using the Time Machine utility.

Bottom line: If you own a Mac, your computer is not immune from malware infections. Chances are it WILL eventually become infected unless you take action to prevent it.