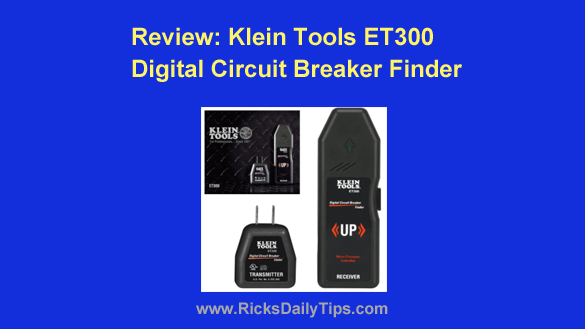 If you have ever needed to find the circuit breaker that controls a certain electrical outlet you know how difficult the task of finding the right breaker can be.

It usually involves plugging a lamp into the outlet and then switching off all the breakers, one by one, until the lamp goes out.

If you don’t have a partner watching the lamp, that means you have to switch off each breaker and then make a trip to the outlet to check the status of the lamp. If the lamp is still on, you still haven’t found the right breaker.

What’s worse, after you have finally found the right breaker you discover that you have flashing clocks and powered-off appliances all over the house.

Needless to say, this almost always turns out to be a time-consuming, tiring and frustrating process.

But it doesn’t have to be that way…

Luckily, there’s an easy way to find the right breaker every time, very quickly, and without needing a partner to help you. All you need is a circuit tracer.

I recently had the opportunity to check out a Klein Tools ET300 Digital Circuit Breaker Finder, and to be honest I didn’t really know what to expect since I had never used a circuit tracer before.

Well, let me just tell you: I will never be without one of these little jewels again!

This tool is actually a kit consisting of two separate devices. The transmitter is a small device that plugs into the outlet you’re trying to find the matching breaker for. The receiver is a type of electronic wand that you pass over the breakers until you find the right one.

I tested my Klein ET300 on seven different outlets in various rooms of my house, on both floors. Without exception, it detected the correct breaker every time, and it only took about 20 seconds or so to track each of the breakers down.

Using this tool is about as easy as something like this can be. This is all you have to do:

1 – Plug the small transmitter device into the outlet you need to find the matching breaker for. If the outlet is “hot” (has power on it) a small red LED will glow.

2 – Once you have confirmed that the outlet is hot (the red LED is glowing), walk to the room that contains the circuit breaker panel and open the panel’s door to expose the breakers.

3 – Turn on the receiver wand by pressing and releasing the button on the side. It should beep momentarily and the arrow should light up. A red LED right next to the power button will light up to show that the receiver is on and ready to use.

4 – Starting with the top-left breaker, hold the receiver wand perpendicular to the breaker and begin moving the wand down from breaker to breaker until you reach the breaker at the bottom. Ignore any beeps you hear on this first pass.

5 – Repeat step 4 to scan the breakers on the right-hand side, again ignoring the beeps.

6 – Re-scan the breakers again starting with the ones on the left-hand side. This time you should only hear one beep which means you have found the breaker you are looking for.

As you can see, the transmitter and receiver in the Klein ET300 kit are extremely easy to use, and they work like a charm. There are a few things I do need to mention however:

1 – The transmitter will only send the tracing signal over a live (hot) wire. If the breaker you’re looking for is already switched off you won’t be able to use this kit to track it down.

Of course if the breaker you’re looking for is switched off you’ll probably be able to find it quickly even without a circuit tracer.

2 – Don’t skip the initial scan of the breaker box. That initial scan is important because that’s when the receiver is “learning” the panel, making it possible for it to quickly and accurately detect the desired breaker on the second pass.

3 – The transmitter doesn’t require a battery as it draws its power from the circuit being traced.

The receiver does use a 9 volt battery which comes already installed in the wand when you purchase the kit. If the receiver doesn’t beep or light up when you press the button you’ll need to replace the battery.

I have only used this kit one time (while I was testing it and putting it through its paces) so I can’t tell you how long the battery will last. But that being said, my best guess is that it will last a long time since the receiver draws just a tiny amount of current and it shuts off automatically when you are finished using it.

4 – The power-on switch on the side of the receiver is very sensitive. Just the slightest tap will turn the unit on and cause it to beep and light up, and that can be a bit startling if you aren’t expecting to hear it.

Bottom line: The devices in this awesome little kit make tracking down the breaker for any given outlet fast and easy while removing all the guesswork, legwork and frustration. In my opinion, if you own a home, you need one of these ingenious devices!