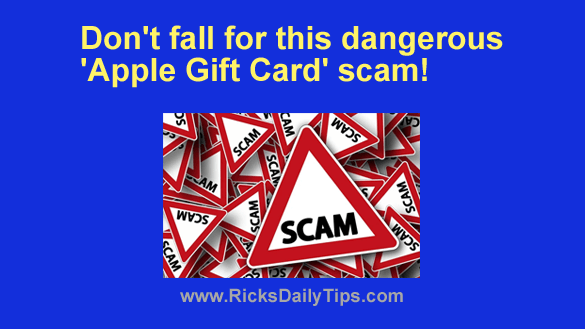 As you probably know, scammers are coming at you from every direction these days.

I try my best to keep you up-to-date on the latest scams that are making the rounds, and there’s one involving Apple gift cards that a lot of kind-hearted individuals are falling for.

As usual, there are several variations of this scam but they all depend on the scammer gaining the victim’s trust over time.

In a nutshell, the scammers befriend someone on a social media site (most often Facebook) and attempt to gain their trust by talking to them via Messenger.

They’ll keep this dialog going until they feel the victim is “ripe” for exploitation, and then they strike.

Once they know their victims trust them, the scammers contact them saying they are in desperate need of financial help.

Some scammers will say they are very sick and they need money to go to a doctor.

Others will say their electricity has been shut off in the dead of winter and they have to pay a hefty fee to have it turned back on.

The most devious scammers of all will tell the victim they would really love to come and visit them but they’ll need money for a plane ticket, a bus ticket or a rental car.

These are just a few of the most common excuses the scammers are using, but they can be anything really – most any excuse that will push victims’ buttons and tug at their heart strings will do (which the scammer figures out via the chats).

Once the victim agrees to “help” they’ll be instructed to purchase enough Apple gift cards to pay for whatever the fake “need” will cost to get it taken care of. They’ll then ask the victim to send them either the cards themselves or their redemption codes.

Many of the scams and hoaxes I write about aren’t really all that dangerous, they’re just extremely irritating.

But this one is actually dangerous because many victims are losing large amounts of money after falling for it.

In fact, I got a frantic message from one of my long-time Facebook friends the other day asking for help in recovering over $800 that she had spent on Apple gift cards to pay for a plane ticket so her “boyfriend” could visit her from Ireland (who knows where he was really from?).

Of course after she sent him the redemption codes for the gift cards he immediately deactivated his Facebook account, and she hasn’t heard from him since.

Unfortunately, there wasn’t anything I could do to help her, and it broke my heart to have to tell her that.

Bottom line: If anyone you don’t know well and have never met in person asks you to send them Apple gift cards for any reason, it’s most likely a scam.

It pays to be extremely wary about sending anything of value to someone you “met” over the Internet. Just sayin’.