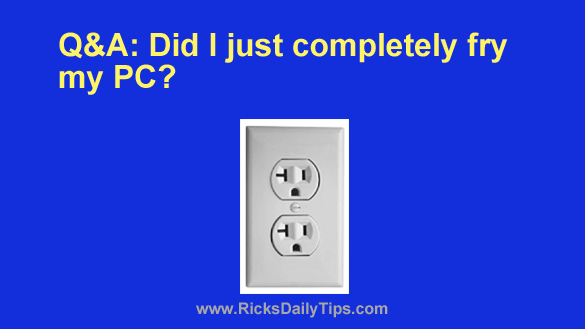 Question from Theresa:  Hi, Rick. I’m really upset this morning because my computer was damaged due to a bad electrical outlet.

What happened was I hired an electrician to install an electrical outlet in my new sunroom so I could move my computer out there.

As soon as I plugged the computer in and turned it on I heard a loud POP and now I can’t get either the computer or monitor to come on.

My brother stopped by and checked the outlet and found that it has 238 volts on it instead of 120.

I have two questions:

1 – Are my computer and monitor completely ruined, or can they be repaired (for a reasonable fee)?

2 – Is the electrician that installed the outlet responsible for the cost of repairing or replacing my damaged equipment?

Rick’s answer: Theresa, the answers to your questions are (1) maybe and (2) absolutely. Read on and I’ll explain why.

Based on your description of the event, it’s most likely the power supply in the desktop that is preventing it from powering up.

Believe it or not, I’ve seen this very situation a couple of times before, and in both instances a new power supply got the PC powered up and working again. And luckily, that’s a relatively inexpensive repair.

The things is, it all depends on how the computer is made. If it has either a stand-alone power supply or a “power brick”, those are easily replaced.

However, some models come with the power supply actually built onto the PC’s motherboard, which would require replacing the motherboard itself.

If that turns out to be the case with yours, that will be a relatively expensive repair.

Now, let’s talk about the monitor…

As far as the monitor is concerned, the problem could range anywhere from a blown fuse to a totally fried circuit board.

The fact that you didn’t mention a burning smell leaves at least some hope that it’s just a blown fuse. If so, that’s a very inexpensive repair.

And finally, there’s the matter of the electrician’s liability…

If you have a receipt proving you paid the electrician to install the outlet, you can hold him responsible for ensuring that the job was done correctly.

And it obviously wasn’t done correctly or there wouldn’t be 238 volts AC coming out of what’s supposed to be a 120 volt wall outlet.

In my opinion, the electrician is responsible for replacing, NOT repairing your PC.

Power surges often weaken components that still continue to work, only to have them prematurely fail at a later time.

I recommend that you insist on a new PC, Theresa.

I’m not an attorney so I cannot give legal advice, but I can tell you the following based upon personal experience: Proving responsibility in cases like this is often the easy part. The hard part is collecting.

Document everything that happened and ask the electrician to replace your computer and monitor with new ones that are equivalent to or better than the damaged ones.

If he refuses, you will probably have to take him to small claims court (where you will almost surely win as long as you have that all-important receipt). Just make sure the value of the computer is high enough to justify the expense and aggravation involved with going to court.