You are here: Home / Tech Questions & Answers / Q&A: Are WiFi and the Internet the same thing?
923
SHARES
ShareTweetSubscribe 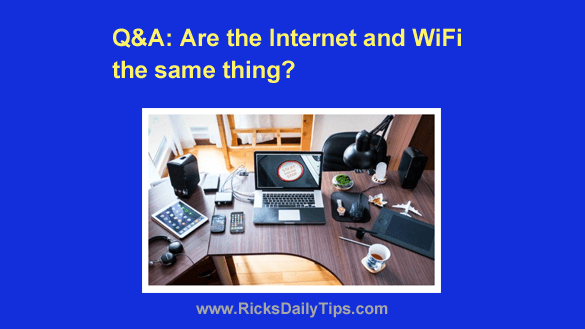 Question from Beverly:  I’ve always thought that Internet and WiFi were just two names for the same thing, but someone told me they were different.

Is that true? If it is, what’s the difference?

Rick’s answer:  What that person told you is accurate, Beverly.

While WiFi and the Internet are frequently used together, they are in fact completely different technologies that serve two very different purposes.

WiFi is basically a radio signal that provides a wireless connection between a device such as a computer, a smartphone, or tablet and some other device (usually a router or Internet gateway).

In simplified terms, a wireless WiFi connection essentially takes the place of a physical Ethernet cable.

A wireless WiFi network connects two or more devices together, typically via a wireless router or gateway.

Although there are rare exceptions, the vast majority of WiFi networks serve a relatively small area such as part of a building, an entire building or a handful of very close buildings.

There are billions of individual (and independent) Wi-Fi networks located in homes, schools and businesses around the world.

Now, let’s talk about the Internet…

The Internet is a massive world-wide computer network that connects many billions of devices located in every country on the planet together via one massive network.

When you visit your favorite website, check your email, get on Facebook or log into your online banking account you are actually using the Internet to connect to a remote server that could be located literally anywhere in the world.

And finally, let’s talk about how WiFi and the Internet work together…

When a device such as a smartphone or tablet connects to the Internet via a cellular connection, it isn’t using WiFi to make that connection.

In that case you’re accessing the Internet without using a WiFi connection at all.

If your situation is typical, if you aren’t using cellular data your phone, tablet or laptop connects to a local router via a WiFi network. The router then connects that WiFi network to the Internet at large via a modem.

Note: Many laptop and desktop computers connect to the router via an Ethernet cable instead of WiFi.

Here’s a handy diagram that shows the typical relationship between a local WiFi network and the Internet at large: 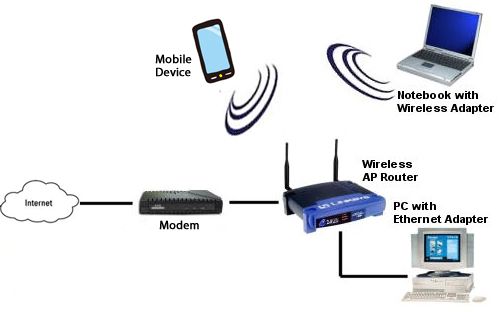 As mentioned earlier, the Wi-Fi signal simply connects your device to the router wirelessly instead of via a cable. And then the router connects to the Internet via a modem. Pretty simple, right?

Well, there you have it. That, in a nutshell, is the difference between WiFi and the Internet.

By the way, you can access other devices on your local WiFi network even when there’s no Internet connection available.

For example, lots of folks these days use WiFi to connect their computers and mobile devices to printers and backup drives, and they can use those devices even when their Internet connections are down.

And now, one final thought: Lots of folks still use older, non-WiFi capable routers to access their Internet connections. They simply plug their computers into the router with an Ethernet cable, and it works just fine!