You are here: Home / Tech Questions & Answers / Q&A: What does HughesNet mean by ‘Unlimited data with no hard data limits’?
1k
SHARES
ShareTweetSubscribe 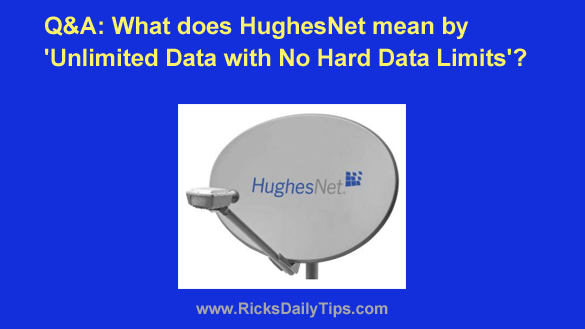 Question from Kellie:  Right now we have a DSL Internet from our local phone company.

It was pretty good when they first installed it, but it’s been terrible for the past year.

We’re wanting to switch to something else because my download speeds are averaging less than 2Mbps and they refuse to do anything to make it faster.

We really need the higher speed because our family does a lot of video streaming (or at least we try to).

Sometimes the Internet stops working at all and stays out for days at a time. I’d sign up for cable Internet but it’s not available in my area.

I’m hoping you can clear something up for me.

I’ve been seeing commercials for HughesNet satellite Internet that say they have “Unlimited data with no hard data limits“.

What exactly do they mean by that? It’s really confusing.

If they really do offer unlimited data why would they even mention data limits at all?

Rick’s answer: I can certainly understand why you’re confused by that, Kellie. The commercials just throw that line out there without even trying to explain what it means.

The “Unlimited Data” part of the phrase means just that. As long as you are subscribed to a HugesNet data plan you can use all the data you want every month without having to worry about your Internet access being cut off because you exceeded some pre-determined data cap.

But now we get to the tricky part…

Even though HughesNet guarantees that your Internet service will never be cut off because you exceeded a data cap, their FAQs page states that your download speeds will drop from 25Mbps to a snail-like 1-3 Mbps after you reach the data threshold that’s defined in your chosen data plan.

If you decide to sign up with HughesNet you’ll be able to choose from several plans ranging from 15GB per month to 75GB per month.

If you happen to exceed your plan’s data threshold at any time during a given month, your download speed will instantly drop to the 1-3 Mbps level for the remainder of that billing cycle.

The problem is many HughesNet customers end up exceeding their plan’s data threshold every month because, like your family, they stream a lot of video which really gobbles up a ton of data.

And of course when their download speeds drop to the fallback level their Internet experience suffers greatly as a result.

But I have some good news for you…

If you end up exceeding your monthly high-speed data allotment you won’t be stuck at the snail’s pace of 1-3 Mbps if you’re willing to shell out a few extra bucks.

HughesNet will gladly sell you some “Data Tokens” which will boost your speed back up to 25Mbps for the duration of the extra data purchased.

But there’s also bad a bit of bad news…

Those “Data Tokens” aren’t cheap. In fact, it will cost you about 10 bucks a month extra just for a measly 3GB of extra data. That really isn’t much for a family like yours that does a lot of video streaming.

Bottom line: HughesNet is being honest when they say their data plans come with unlimited data, but their commercials are a bit misleading when they casually mention “no hard data limits” without explaining exactly what that means.

Update from Kellie:  Thanks for that explanation. It was a big help!

I think I’ll go ahead and sign up with HughesNet. The 25Mbps will be awesome while it lasts. And even after it drops to 1-3 Mbps it’ll still be about as fast as the speed I’m getting now.