You are here: Home / Tech Questions & Answers / Q&A: ‘Bluetooth’ seems like an odd name for a wireless technology. Why do they call it that?
1.5k
SHARES
ShareTweetSubscribe 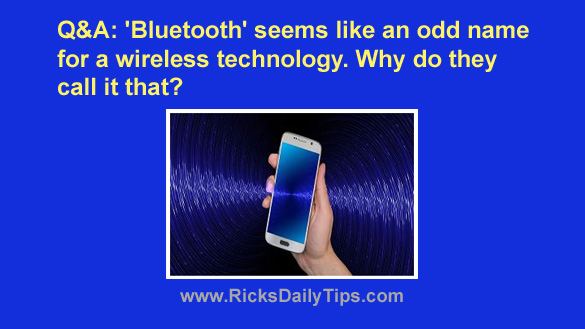 Question from Ken F.:  I know that Bluetooth is the wireless signal that connects smartphones to speakers and other portable devices.

What I’m curious about is why did they choose the name Bluetooth?

That seems like a really odd name for something to do with technology.

Thanks in advance for your answer!

Rick’s answer:  I agree, Ken. Bluetooth is indeed an odd name for an electronic communications technology.

However, as it turns out, the developers of Bluetooth chose that name for a specific reason.

Way back in the 10th century there was a Scandinavian king named Harald “Bluetooth” Gormsson.

King “Bluetooth” was apparently so named because he literally had a tooth that was so diseased that it had turned blue. I know that isn’t a very pretty mental picture, but it’s central to the answer to your question.

Anyway, other than the color of his bad tooth, King Bluetooth’s other claim to fame was his success at uniting several competing Danish tribes into a single kingdom throughout the region that now consists of Denmark and Norway.

As a result of that success, King Bluetooth came to be recognized as a “uniter”.

Now fast-forward to the 21st century when the heads of Intel, Nokia and Erickson met to discuss the standardization of the short-wave connective technology we now know as Bluetooth.

They ultimately settled on that name after Jim Kardach of Intel said they hoped to “unite the PC and cellular industries with a short-range wireless link“.

In other words, like King Bluetooth himself, the new wireless technology they were developing was designed to be a “uniter” – hence the selection of the name “Bluetooth”!

There you have it, Ken. Thanks for asking such a great question!

Bonus tip:  This post explains how to easily turn any regular speaker into a Bluetooth speaker.