You are here: Home / Computer Tips / Build a battery backup that will power your computer for hours instead of minutes
626
SHARES
ShareTweetSubscribe 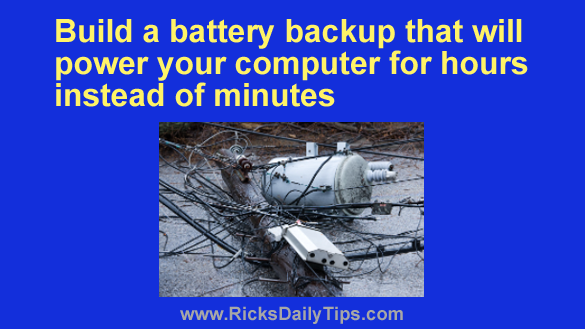 Truth be told, they are absolutely essential if you live in an area that’s served by an unreliable power grid, especially if you work from home and need to keep your computer gear up and running during frequent outages.

But as awesome as battery backup devices are, all consumer-grade models share one major disadvantage…

Their batteries only have enough storage capacity to power your devices for a few minutes. In fact, even a relatively expensive 1,500VA model will only keep a typical home computer setup running for about an hour.

That means if your power occasionally goes out for longer than an hour at a time you’re going to have some down time.

But guess what? For just a little more than you’d have to pay for a 1,500VA commercially-built battery backup device you can build your own “home-brew” battery backup system that can keep your computer, monitor, modem and router all up and running for several hours during extended power outages.

Despite the relatively low price and much longer run-time, this home-brew option is incredibly simple to build. All you need are three components:

Note: I believe the specific items I linked to above offer the best cost to performance ratio for this particular project. That being said, there are plenty of similar devices on the market that will also work if you have specific brands that you prefer to use.

That’s it. Just connect the inverter and battery charger to the battery (observing polarity of course) and plug them into a 120V wall outlet, then plug your computer, monitor, modem and router into the inverter (using a power strip) and you’ll be all set.

This is a good time to present my semi-standard disclaimer…

Important: This project involves the use of a lead-acid battery and a device that produces 120V of AC current.

Although this is a very simple setup to put together, there are still some very real risks involved.

In short, before proceeding with this project you must agree that if a goat ends up eating your car and burping up a tricycle, a mid-summer snowstorm kills all of your petunias or something goes seriously wrong with your home-brew battery backup system, you agree that it won’t be the fault of your humble tech blogger (namely me).

Now that we have that out of the way, you can proceed if you wish to.

1 – The battery charger will charge the battery to 100% and then switch into “maintenance” mode, during which it “trickles” charging current to the battery as needed in order to keep its charge topped off.

That trickle of charging current will guarantee that the battery will be fully charged and ready to use the next time your power goes off.

2 – When you have a power outage you unplug your computer, monitor, router and modem from their current power source and plug them into the inverter (again, using a power strip).

3 – Power the devices back on and the home-brew battery backup system should keep them all powered up and running for several hours.

4 – After the power comes back on you shut down the computer, monitor, modem and router and plug them back into their regular power sources.

5 – Turn the battery charger back on and the battery will recharge and then switch itself back into “maintenance” mode.

If you keep your computer equipment plugged into an inexpensive commercial battery backup device instead of a power strip, you can simply unplug that battery backup from the outlet and plug it into the inverter when the power goes out. That way your devices won’t shut down at all due to the outage.

Then when the power comes back on simply unplug the commercial battery backup device from the inverter and plug it back into a wall outlet.

Of course the actual run-time you’ll get out of your home-built extended run-time battery backup device will vary according to the number of watts each device that’s plugged into it consumes.

The good news is most modern computers, monitors, modems and routers don’t draw anywhere near as much power as their vintage predecessors did, which means you should be able to easily get five hours or more of run-time out of a single battery charge.

And of course you can expect to get a lot more run-time if you have a laptop instead of a desktop computer.

You don’t have to settle the mere minutes of run-time you’ll get out of a commercial consumer-grade battery backup device.

You can easily build your own home-brew device that’ll keep your essential gear up and running for hours!

To finish up, although it’s entirely optional, I strongly recommend that you watch this short, but very enlightening video that explains in more detail how all of this works. It’ll really help you understand exactly how this type of setup works.