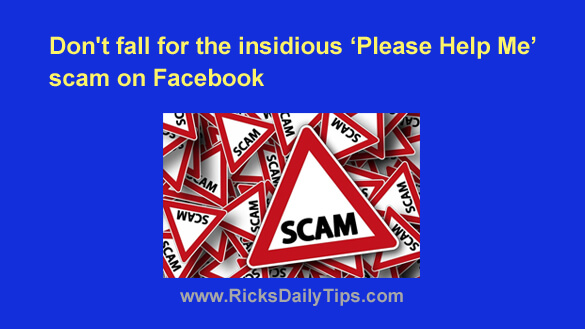 As you probably know, Facebook is a haven for crooks and scammers due to its massive 2+ billion world-wide user base.

An old Facebook scam that exploits the trust and love people have for their family members is once again making the rounds, and it’s easy to fall for this one if you aren’t careful.

There are subtle variations of the scam, but it typically works something like this:

First, a scammer will look for a Facebook user who has a lot of family members listed on the About page. He’ll then select a family member who the user is unlikely to correspond with on a regular basis (i.e. a cousin, niece or nephew who lives in a distant state).

Next, the scammer impersonates the intended victim’s family member by creating a fake, but realistic-looking copy of the family member’s Facebook account. He’ll steal some photos from the original account and write up a bunch of status updates and share some links similar to the ones the family member usually posts.

After the fake account has “aged” for a few weeks, the scammer will send the intended victim a friend request, which is often accepted.

After a few more days, the scammer will send the victim a frantic message from the fake Facebook account. The message will explain that the family member is in some sort of dire situation and he needs for the victim to wire him some cash.

I’m sure you already know how important it is to be on the lookout for scams on Facebook, but these scammers can be quite convincing.

They are often able to craft realistic and fairly believable pleas for help because they take the time to study the family member’s Timeline and About page and research which pages they have Liked and which Groups they are members of.

In short, they take the time to learn the family member’s habits and preferences for virtually every aspect of their lives, and as a result they take a surprising number of victims to the cleaners before they either get caught or move on to their next scam.

Bottom line: Never send cash to anyone claiming to be a family member in need without verifying the situation first.

I recommend calling the family member on the phone or at least speaking to someone close to that person who should absolutely have knowledge of the situation.

As always, be careful and keep a tight hold on your money until you know what’s up.