You are here: Home / Computer Tips / Q&A: Can I get my motherboard’s serial number without opening the case?
569
SHARES
ShareTweetSubscribe 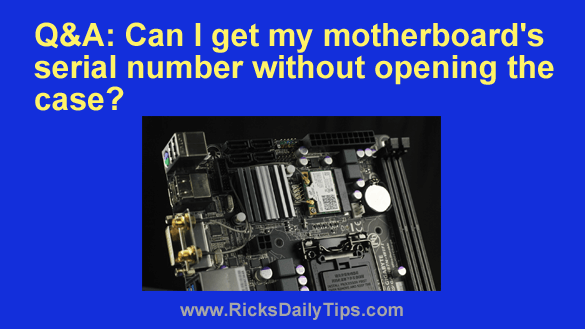 Question from Sharon:  Back in 2020 I bought a custom-built PC from a computer store that’s about three hours away in another city.

My daughter lived there at the time and she had recommended them to me after buying one from them.

Anyway, I received an email from them saying some of the motherboards they had used during that time have been recalled due to a potential fire hazard.

They asked me to send them the serial number of my computer’s motherboard so they could check to see if it’s affected by the recall. Can you help me retrieve it?

They said if I would bring the computer in they could check it out for me, but like I said, that’s a three hour drive!

Is there any way I can check the serial number without having to open up the computer?

Rick’s answer:  Sharon, there are several ways to retrieve a motherboard’s serial number via software, but the easiest way is to type a special command into a Windows “Command Prompt” window.

Just follow the steps below to quickly get your motherboard’s serial number without having to open the case:

Note: The following procedure will work on most Windows PCs, but not all of them. If it fails to work for you just let me know and I’ll give you a different method to use.

1 – Click the Start button, then type the letters CMD.

3 – Copy and paste the following after the command prompt (i.e. right after the > character):

That’s all there is to it. If all went well you should now see the serial number of your computer’s motherboard displayed on the screen.

Update from Sharon:  Thanks a million. It worked!