It’s the old “Facebook No Swearing Campaign” hoax, and it’s filling up newsfeeds right and left.

In a nutshell, the hoax consists of an image stating that Facebook will shut down the accounts of any users who use profanity in their posts starting on April 1, 2018.

The message also states that this policy is being implemented due to a new “law” issued by Facebook’s legal department.

This is what the current iteration of the hoax message looks like: 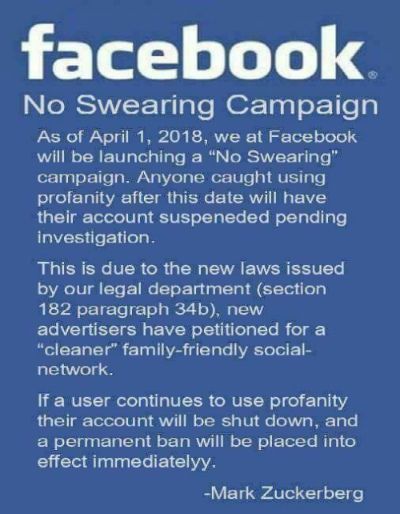 Many well-intentioned users are taking this post at face value and sharing it on their Timelines to prevent their friends from getting banned.

The problem is, both the image and the message it conveys are hoaxes.

Like most other mainstream social media sites, with just a few exceptions Facebook allows users to use virtually any kind of language they choose to use.

And by the way, Facebook cannot “issue laws”. Only Congress and other government legislative bodies can create new laws.

Of course Facebook can and does create and demand adherence to new “rules”, but the fake “law” detailed in this hoax isn’t one of them.

Unfortunately, about the only thing you can do to prevent profanity from showing up in your personal newfeed is to either block or hide the Facebook friends that regularly use it.

Luckily, if you have a business page or “fan” page you can block profanity via your page settings.

Bottom line: Facebook isn’t planning to delete the accounts of users who choose to use profanity in their posts. Instead, they leave it to us to police our own newsfeeds by either blocking any offending friends or “hiding” their posts.

Bonus tip: Click here to read about several other hoaxes and scams that are currently making the rounds on Facebook and elsewhere.