You are here: Home / Tech News / Facebook confirms their “Does this post contain hate speech?” messages were a test (that went very wrong)
758
SHARES
ShareTweetSubscribe

Yesterday Facebook started testing a new way to combat “hate speech” on their platform and I wrote a post explaining why I think it’s a very bad idea.

Some folks believed the strange “Does this post contain hate speech?” question that was displayed on every post in some users’ newsfeeds was simply a glitch and not something that Facebook was really testing.

Well, it was indeed a real test, but it was apparently rolled out prematurely and it quickly went off the rails.

After receiving tons of not-so-positive feedback, Facebook’s Vice President of Product Management Guy Rosen responded to the feedback with the tweet displayed in this screenshot: 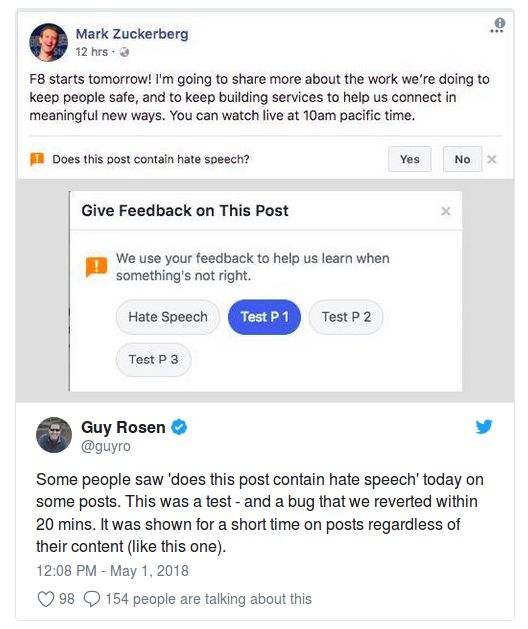 Anyway, this accidentally premature test only lasted about 20 minutes but it drew plenty of (hopefully) valuable feedback that the company can (hopefully) use to determine that maybe this entire idea should be scrapped.

As I mentioned in yesterday’s post, allowing individual Facebook users to determine what constitutes “hate speech” probably won’t end very well for either the company or its users.

I believe it should be left to each individual user to determine what is and is not “hate speech” for ourselves. After all, it’s very easy to block someone or unfollow a page if we don’t like the content of their posts.

Do you agree? Disagree? Feel free to express your own opinion in the comment section below.