You are here: Home / Smart Phone Tips / Why posting ‘Check-Ins’ on Facebook is a really bad idea
1.7k
SHARES
ShareTweetSubscribe 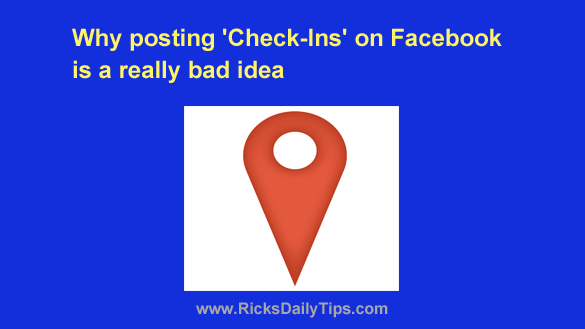 If you’ve been keeping up with me on Facebook for a while you’ve probably noticed that I never, ever post a “Check-In” on my Timeline.

And I never will.

If you’re wondering why, just ask yourself this simple question:

If I were a burglar, would I prefer to break into a house that could possibly be occupied when I get there or a different house that I know will be empty?

The answer is obvious…

Given a choice, most burglars will choose to target a house they know to be unoccupied rather than take a chance on a house where someone could be waiting inside with a weapon they’ll use to defend their family and their property.

When someone posts a check-in showing you’re waiting for dinner to be served in a nice restaurant or you’re getting ready to watch a show at the theatre, that’s a virtual invitation for a nearby burglar to pay your home an unplanned (and unwelcome) visit.

Even worse, if a burglar knows you’re going to be watching a movie or a ball game for the next couple of hours he’ll be able to take his sweet time and search every nook-and-cranny of your house in search of your valuables without having to worry about you coming home and catching him in the act.

That’s why I recommend that you use these “check-ins” only rarely, if at all.

And whatever you do, don’t post a photo of you and your entire family at the airport with a caption that reads something like…

“So excited! Waiting to board our plane for Jamaica. See ya’ll next Sunday!”

You might be thinking “But I have a security system so my house is protected!”

I think that’s great because every home should be protected with a good, dependable security system.

However, while a good security system can help deter potential burglars from entering your home and alert you and the authorities to a break-in, it can’t and won’t prevent a determined and/or desperate thief from taking the chance on a quick “smash and grab” attempt.

And while it’s also true that keeping your physical address off of Facebook can help protect your privacy from casual users, if a potential burglar knows which city/town and state you live in he can Google your address in less than a minute. Just something to think about.

To finish up, consider this:

Your Facebook “Friends List” could well have one or more people on it who aren’t exactly honest.

And if you have a lot of “friends” that you know only casually (or perhaps not at all), the odds of one of them being a potential burglar are even higher.

Think of it this way…

Would you trust everyone on your Friends List with the key to your house?

Would you trust them with the keys to your car?

If the answer is no, then it would probably be a bad idea to trust them with the knowledge that your house is going to be unoccupied for a while. Just sayin’.

Now I didn’t say everything I said above to discourage you from enjoying Facebook and interacting with your friends.

That’s what social media is for, and there’s absolutely nothing wrong with sharing some aspects of your life with others via Facebook and your other social media profiles.

All I’m saying is it pays to use a little discretion when deciding what types of information you’re going to share with people you don’t know well enough to trust with the key to your house.

Bottom line: While there’s absolutely nothing wrong with sharing the good times and experiences you have with your friends on Facebook, it’s a lot safer to do the sharing after the event/trip is over instead of while it’s actually in progress.