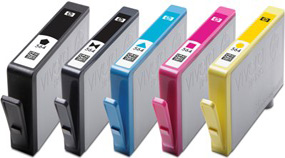 If you use an inkjet printer you’re probably well aware of just how expensive it is to replace your empty ink cartridges. It’s absolutely ridiculous how much they cost these days!

With many cartridges selling for upwards of $30 each, it makes sense to try to squeeze every drop of that precious fluid out of them before tossing them into the recycle bin.

What you might not know however is that many “empty” ink cartridges actually still have some ink left in them when the printer tells you they’re empty and ready to be replaced.

In fact, a test conducted by PC World magazine found that a couple of the most popular printer models told them to replace the black ink cartridge when it still had half of its ink left!

I have long held the opinion that consumers are getting ripped off when they buy ink for their printers. After all, we’re talking about literally paying hundreds of dollars per gallon for a simple colored liquid. Being forced to replace a cartridge that is still half full is outrageous in my opinion (and I believe it should also be illegal).

The printer manufacturers claim that it’s necessary to leave a little ink remaining in the cartridge in order to avoid damaging the printer when it tries to print with no ink coming out. Fair enough. They can require us to leave a tiny amount in there if they really must. But half the initial amount? Give me a break!

What can you do about this? Not much really, except the following:

1 – If you suspect that your printer requires you to replace the ink cartridges before they are anywhere near truly empty, I recommend that you buy a new printer

Many models will warn you that your ink cartridge(s) are running low, but allow you to keep printing anyway until the ink actually runs out. I’ve used printers like this for years with no problems whatsoever.

2 – Buy an ink refill kit (#ad) and refill your ink cartridges yourself for pennies on the dollar. Yes, you can do it, and with the right kit it isn’t difficult or messy. Amazon has plenty of refill kits to choose from. Simply choose one for your printer brand that has lots of positive user reviews.

Bottom line: Your printer just might be lying to you when it tells you that your ink cartridge is empty. If possible, simply ignore the warning and save yourself some cash! And if your printer won’t allow you to ignore it and stops printing, I recommend that you replace it with one that will.