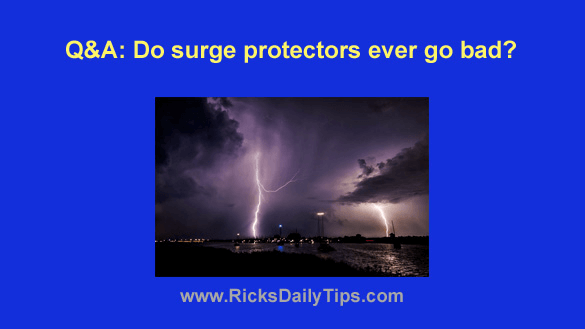 Question from Jeannie:  Hi, Rick. I live in an area that’s prone to frequent electrical storms so I’ve always been fanatical about keeping my electronic stuff plugged into surge protectors.

But I heard the other day that surge protectors can go bad after a while. Is that true? All of mine are several years old.

Rick’s answer:  Jeannie, the answer to your question is yes, surge protectors

do indeed go bad. But the reason they go bad has more to do with their environment than with their age.

The protective components inside surge protectors work by shunting power surges to ground. This keeps the amount of over-voltage reaching your device(s) to a minimum.

That’s what we want of course, but every voltage and current spike that a surge protector is subjected to damages those protective components to a certain extent.

Over time, the effects of this damage add up and reduce the effectiveness of the surge suppressor. If left in use long enough, a surge protector will lose its ability to protect your equipment at all.

How long does it take for a surge suppressor to stop working?

Well, that depends on the frequency and strength of the surges it’s subjected to. If the local power grid is relatively stable and electrical storms are rare, a surge protector can work well for years.

But if your local power grid is “dirty” (which means there are lots of voltage spikes and dips) and/or there are frequent electrical storms in your area, you should consider replacing your surge protectors every fall after the storm season has ended in your area.

It’s important to also understand that a surge suppressor won’t protect your equipment from a direct lightning strike. And yes, that includes the surge protectors themselves.

That’s why you should replace your surge protectors immediately if your power grid takes a lightning strike that produces a power surge so strong that it damages one or more of the electrical items in your home.

If lightning directly strikes the power grid near your home, you’ll likely lose at least some of your surge protectors AND possibly everything that’s plugged into them.

What’s more, even if your equipment doesn’t stop working immediately it could well be damaged enough to cause it stop working sooner than it would otherwise.

Bottom line: If you live in area that gets hit with frequent thunderstorms, you’d be wise to replace your surge protectors at least every other fall. And you should replace them immediately if your house’s power grid receives a direct lighting strike.

When it comes time to replace your surge protectors, you’ll be able to find them at most any local retailer that sells electronic gear.

Personally, I prefer to shop for mine at Amazon where I can check out the user reviews.

Bonus tip: This post explains how to protect all of your electronics and appliances from power surges and lightning strikes with a single Whole House Surge Protector.