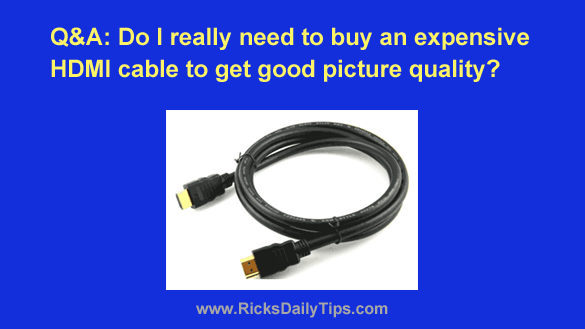 Question from Denise:  Rick, I went and bought a new 4K flat screen TV a couple of days ago after asking the sales rep for a recommendation.

Long story short, I absolutely love the TV he recommended, but something is bothering me.

He insisted that I also needed to purchase a super-expensive HDMI cable to connect my Roku 4K device to the TV. He said the video quality would be greatly reduced if I bought a cheaper one.

The one he talked me into buying was $70! Did I get ripped off?

Rick’s answer:  Denise, I wouldn’t go so far as to say you got ripped off, but I’ll definitely say you were horribly mislead.

It’s true that back in the days of analog audio and video the quality of the cables used to connect the components together often made a noticeable difference in the quality of the sound and picture, and higher quality cables came at higher prices. But times have changed.

We live in a digital world now, a world where data (audio and video signals) are no longer transmitted via the finicky and unreliable analog signals of yesteryear.

What’s more, the HDMI ports on your devices handle those zeroes and ones in a special way that ensures that your TV will receive an extremely reliable signal.

Although the cable manufacturers won’t tell you this, a $10 4K HDMI cable will deliver digital video and audio signals just as efficiently as the one you just paid $70 for.

Most likely it will since HDMI cables aren’t typically plugged in and unplugged and moved around on a regular basis.

But it probably doesn’t matter anyway because even the cheapest HDMI cable will likely outlast the devices it’s connected to.

You don’t have to take my word for it either, Denise. Just do a Google search for “Do I really need an expensive HDMI cable?” and you’ll find links to a number of independent tests that confirm what I just told you.

Even though this particular cable costs about what you’d pay for a burger and fries, it has a mind-blowing 32,000+ overwhelmingly positive user reviews.

That means literally tens of thousands of people have used this particular cable, and almost all of them seem to love it.

My advice: Return that expensive cable right away and buy a cheaper one. In my opinion, $20 or less is reasonable. $70 is not.