You are here: Home / Computer Tips / 3 ways to identify your PC’s CPU type without opening the case
795
SHARES
ShareTweetSubscribe 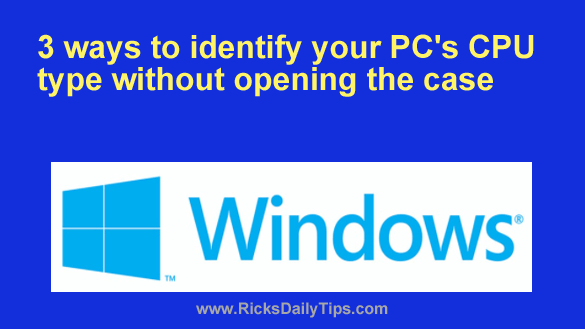 Most computer users have no idea what type of CPU is inside their machine, and that’s fine.

As long as your computer works properly and gets the job done, its CPU type is rarely a concern.

That being said, there might well come a time when you’ll need to know what kind of CPU is inside your PC.

Here are three ways to discover the CPU type in a Windows PC without having to open the case:

a) If your PC is running Windows 7 or earlier:

Right-Click on the Computer icon and then select System from the menu that pops up. You should now see the CPU type listed on the “System Information” screen.

Right-click on the Start button and then select System from the menu that pops up. You should now see the CPU type listed on the “System Information” screen.

2 – Use the Windows Command Line

a) Press the Windows+R key combination to open a “Run” box.

b) Type CMD, then press the Enter key.

c) Copy and paste the following at the command prompt:

3 – Use a third-party System Information utility

You can also use a third-party System Info tool such as HWiNFO or Speccy if you’re interested in finding out a ton of other information about your computer’s hardware.

Chances are you’ll never really “need” to know this extra info, but you might find it interesting none the less.

That’s all there is to it. Now you know how to determine your computer’s CPU type from within Windows.

Caveat: Neither of these methods will work if you’re unable to get the system to boot up into Windows, in which case you’ll either have to Google the PC’s model number or remove the case cover and take a look at the markings on the CPU (which typically requires removing the CPU cooler).