You are here: Home / Tech Questions & Answers / Q&A: What are the differences between a ‘Gaming PC’ and ‘Workstation’?
653
SHARES
ShareTweetSubscribe 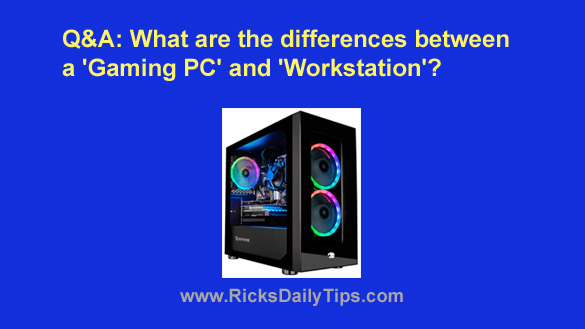 Question from Adrian:  My dad is planning to buy me a new gaming PC to replace the one I got several years ago for my 11th birthday.

While I was researching the machines that are available today I saw that some of the more expensive ones are called workstations instead of gaming PCs.

I had never heard of the term workstation before. I’m almost shamed to ask about them because I like to think I’m pretty up-to-speed about tech things.

Anyway, here are my questions:

1 – Are workstations pretty much the same thing as gaming PCs or are there substantial differences between them?

2 – If there really is a difference which one would be better for actually playing the games I love?

Rick’s answer:  Those are great questions, Adrian. And don’t feel bad about asking them because plenty of fairly tech-savvy folks are probably wondering the same things.

To answer your first question, there are indeed major differences between gaming PCs and workstations.

However, I’ll start by saying they do have one thing in common: They are both typically more powerful and more expensive than general purpose computers.

Now, let’s discuss a few important attributes of these two types of machines…

And an SSD instead of a spinning hard drive is a huge plus as well.

What gaming PCs don’t need is a lot of CPU cores because the vast majority of the most popular games aren’t written to take advantage of more than four of them.

Gaming PCs also need a powerful graphics card for processing the abundant and complicated graphics code that makes up a large portion of a typical gaming program.

The amount of RAM used in gaming PCs typically ranges from 8GB to 32GB, with most systems in use today probably having around 16GB.

These days the prices of gaming PCs typically range anywhere from $600 at the low end to around $3,000 at the high end.

Workstations need to be faster than general purpose PCs, but more importantly they typically need to be able to process multiple tasks at the same time.

And I’m talking about a lot more tasks than a four-core CPU could ever handle.

In fact, the CPUs in some workstations have a mind-blowing 36 cores!

Depending on the actual tasks being performed, a workstation might get by with the integrated graphics that’s built into many motherboards.

However, if the machine is used for engineering or CAD-type operations its graphics card alone could easy cost several times the price of an entire general-purpose computer.

As stated above, workstations need to be able to process multiple concurrent tasks. That means they typically need a LOT of RAM.

And when I say a lot of RAM, I’m talking about at least twice the amount you’ll find in even most top-tier gaming machines.

In fact, 64GB and even 128GB of RAM is common in the world of computer workstations!

Also, many workstations have multiple hard drives and/or SSDs for concurrently storing all of the data a typical workstation user needs to work with.

As with gaming PCs, the prices of modern workstations vary quite a bit.

The thing is, the prices of workstations start at about the price of a high-end gaming machine!

And if you need something more advanced than a typical low-end workstation the machine you need could easily set you back double, or even triple the amount you’d have to pay for a high-end gaming computer.

So, which is better for gaming?

Although there are certainly exceptions (as with the $5,000 – $9,000 workstations I mentioned above), your games will usually perform better on a well-equipped gaming PC than on a moderately-equipped workstation.

Why? Because as I mentioned above, having a fast CPU is more important for running games than having numerous, but slower operating cores.

If a workstation’s CPU runs at a clock speed that’s pretty close to the clock speed used with a given gaming PC’s CPU and it’s also equipped with a powerful graphics card, then that workstation might well outperform the gaming machine when playing a game.

However, if the workstation is lacking in either of these attributes then the gaming PC is the better choice.

And if money is your primary consideration, opting for a gaming PC will always be a no-brainer.