You are here: Home / Tech Questions & Answers / Q&A: How can I tell if someone received my friend request on Facebook?
773
SHARES
ShareTweetSubscribe 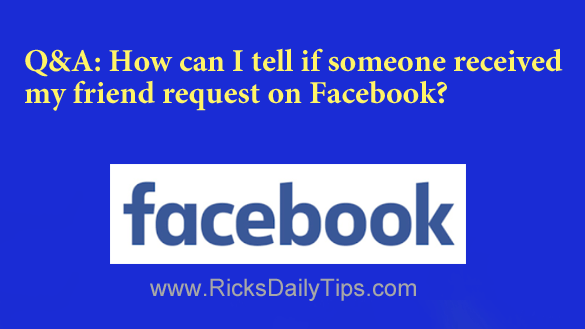 Question from Kelly:  I recently sent a friend request to a friend of mine after I found out she’s on Facebook. It’s been over a week and it still says “Friend Request Sent”.

I used your site’s search box and found this post where you answered a similar question for a woman named Delores, but my situation is a little different from hers.

Apparently Delores’ friend was receiving her friend requests and declining them because she was able to send multiple requests. But my friend hasn’t responded at all because the button still says “Friend Request Sent”.

I know this person has been on Facebook every day since the friend request was sent because she’s been posting like crazy. That’s why I’m thinking it was never received. Is there any way to know for sure that she has received it?

Rick’s answer: Unfortunately, the short answer to your question is no, Kelly. Facebook doesn’t provide a tool for determining whether another user actually received (or viewed) a friend request.

In the post you referred to above I listed three possible ways for someone to respond to a Facebook friend request, and I’ll repeat them here:

1 – She can click the “Confirm” button to accept your friend request. You will then be notified that she accepted you as a friend.

2 – She can click the “Delete Request” button to cancel your friend request. When that happens you’ll see that the “Friend Request Sent” button has now been changed back to an “Add Friend” button. That means you can send that person another friend request at some point in the future.

I believe it’s a pretty good bet that your friend has made the decision to respond to your friend request in the manner described in number 3 above – in other words, she’s simply ignoring the request.

While anything is possible, it’s highly unlikely that your friend either didn’t receive the request at all or simply isn’t noticing it.

In short, there’s no way to know why she opted not to accept your request. Of course you could always just ask her the next time you run into her at the grocery store or whatever, but people who ‘respond” to friend requests by not responding to them at all usually do it because they don’t want to hurt the sender’s feelings.

Now all of the above being said, I recommend that you not take your friend’s refusal to accept your Facebook friend request as a slight. There’s a good chance that it wasn’t meant to be.

Every Facebook user has their own informal policy for choosing whether to add someone as a friend or not.

Some folks will add most anyone who sends them a friend request while others limit their friends list to a very small group of immediate family members and their closest and most treasured “real life” friends. My guess is your friend is ignoring your friend request because she falls within that second group.