You are here: Home / Tech News / Google Chromebooks accounted for 21% of all laptops sold in 2013
357
SHARES
ShareTweetSubscribe 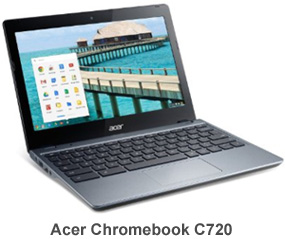 There are several reasons why Chromebooks are selling so well:

1 – First of all, there’s the relatively low price. Since the Google Chrome operating system is completely free of charge, the manufacturers who install it on their laptops can avoid paying Microsoft’s exorbitant licensing fees. These savings are then passed on to you, the consumer.

For example, you can buy an Acer C720

Amazon, and they’ll ship it you for free!

2 – Chromebooks tend to be light-weight and compact, making them easier to use than most Windows laptops when you’re on the go, yet they work a lot more like a regular laptop than smart phones or tablets.

3 – Since they do virtually everything via the Internet, Chromebooks are tailor-made for folks who use their computer almost exclusively for visiting websites, sending and receiving email, Facebooking, and other online tasks.

I knew that Chromebooks were selling well, but I had no idea that they had already taken over 1/5 of the laptop market. And I fully expect that trend to continue in 2014.