You are here: Home / Tech Questions & Answers / Q&A: Should the battery in a new laptop fully charged before using it?
1.9k
SHARES
ShareTweetSubscribe 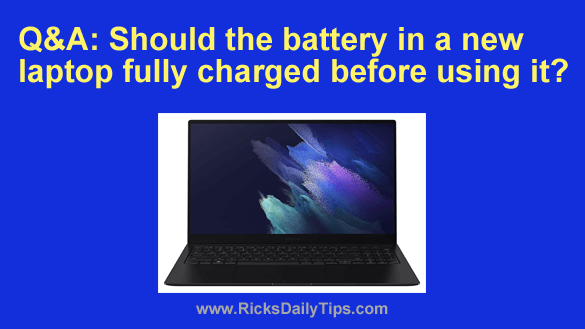 Question from Brenda:  I just bought my son a new laptop for his birthday. As I was paying for it the cashier told me I need to let the battery charge to 100% before I let my son start using it.

In the past I have always just unboxed my new laptops and plugged them in and started using them immediately, and as far as I know there was never any problem.

Do you think I really need to charge the battery before I give it to him?

I’d prefer to let HIM open the box after he wakes up on his birthday and begin using the laptop immediately, but only if it won’t damage the battery or the laptop.

Rick’s answer:  Brenda, there is absolutely nothing wrong with letting your son unpack his new laptop himself and start using it right away. Just make sure he plugs it in and lets the battery charge up while he’s using it.

While it’s quite likely that the battery will arrive with only a partial charge, the AC adapter/battery charger will supply plenty of current for operating the laptop and charging the battery at the same time.

In fact, it was designed to do just that.

You just need to make sure your son lets the battery charge all the way up to 100% before unplugging the charger and letting the laptop run on battery power for the first time.

Bonus tip: This post explains why you should plug your modem and router into a battery backup device.