You are here: Home / Tech Questions & Answers / Q&A: Can Linux be installed on a Mac?
373
SHARES
ShareTweetSubscribe 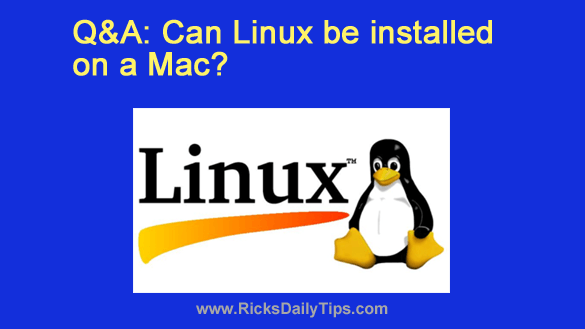 Question from Myron:  I read this blog post about installing Linux on an older Windows PC and found it quite intriguing.

The thing is, I don’t have a Windows PC. I have an older MacBook that can no longer be updated to the latest versions of macOS.

I recently purchased a new MacBook Pro but the old MacBook still runs great and I’d hate to just trash it.

Rick’s answer:  That’s a great question, Myron. And you’ll be happy to know the answer is yes!

There are actually two ways to install Linux on a Mac…

First, you could use an awesome virtual desktop tool called Parallels to install Linux inside a virtual machine.

That would allow you to use either macOS or Linux at any time.

And although it would make your Mac run slower, you could even run both operating systems at the same time and switch from one to the other without having to reboot the machine.

The problem with this option is your MacBook would likely be running an older version of macOS which is no longer supported by security updates.

Your second option would be to completely replace your old MacBook’s macOS installation with a fresh installation of Linux.

In my opinion this would be your best course of action, for the following reasons:

1 – You have a new MacBook to use when you need to use a Mac, therefore you don’t really need macOS installed on the old machine.

2 – Having the old MacBook dedicated strictly to running Linux will make things simpler for you while also streamlining the machine’s performance.

In short, completely replacing Linux on the old MacBook will give you plenty of flexibility since you ‘ll be able to simply run your new MacBook as a Mac and the old one as a Linux box.

What’s more, since both machines would be running the latest updated versions of their respective operating systems, you won’t have to worry about potential security risks.

If you’d like to go the second route our friends over at LinuxHint have put together a really nice step-by-step guide to replacing macOS with Linux.

Bottom line: It’s indeed possible to install and run Linux on a Mac, and there are actually two ways to go about it. Which one you decide on is entirely up to you.