You are here: Home / Tech Questions & Answers / Q&A: Should I let someone build me a PC or just go buy one?
656
SHARES
ShareTweetSubscribe 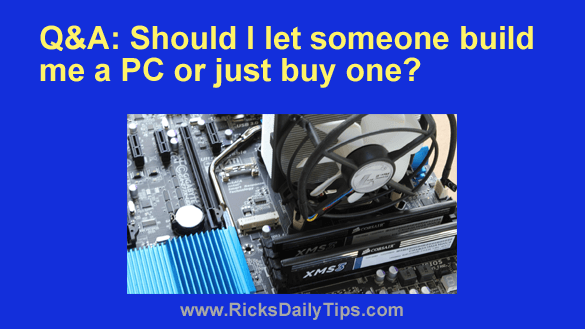 Question from Margaret:  Hi, Rick. I have a question for you about my options for getting a new computer.

What are your thoughts on having someone build a custom computer for me vs. buying a name brand computer at a computer store?

My young cousin Kevin is a computer geek and he says he can build me a PC that’s better than one I can buy at a computer store for the same amount of money. Do you think I should let him?

Rick’s answer:  Margaret, there is absolutely nothing wrong with buying a custom built computer from a friend, but there are a few things to consider before making your decision:

1 – Since Kevin will be purchasing individual parts and assembling them into a working computer, he will be the one who will have to handle any warranty repairs.

If the hard drive or SSD goes out for instance, he’ll have to deal with the company he bought the drive from and hope they’ll replace it under warranty.

The motherboard however could well come from a different company, requiring a different point of contact for any warranty work that might be needed. Ditto for the RAM, power supply and other components.

That means either you or Kevin will need to keep up with all the receipts and warranty information for the various parts in case something fails while it’s still under warranty.

Buying a name brand PC simplifies things a great deal because regardless of which component breaks, you’ll only have to deal with one company and one receipt.

2 – If Kevin is capable of building a PC from scratch, he is probably also capable of helping you resolve any issues that might arise in the future.

But what if he moves away and is no longer around when you need help? There is always a chance that he might take a job in another state or go away to college. If so, who will help you solve your computer problems when they arise?

3 – It used to be easy to save money by building your own computer, but those days are now over.

We used to be able to buy computer parts pretty cheap from mail order companies that specialized in selling computer parts, then assemble them into a working PC.

Those parts were typically sold at deep discounts, allowing you to save money by building a machine instead of buying one off the shelf.

But nowadays the big computer manufacturers buy their parts by the proverbial boatload and get huge discounts as a result, so competing with them on price for a comparable machine is simply no longer possible.

4 – All of the above being said, there is one huge advantage to buying a custom built PC instead of a mass-produced unit: Upgradability.

Custom built computers can usually be easily upgraded in order to keep up with emerging technologies.

For example, upgrading to a faster, more modern motherboard and CPU can often give you the rough equivalent of a new computer at a lower cost, and it’s always a lot easier to make important upgrades to a custom-built PC than to an off-the-shelf machine.

The bottom line is you’ll need to base your decision on the four factors listed above.

If you feel certain that Kevin is capable of supporting your computer hardware (including warranty claims) as well as your Windows installation, then you should be fine if you have him build a PC for you.

Just make sure he’ll be around when (not if) you need him.