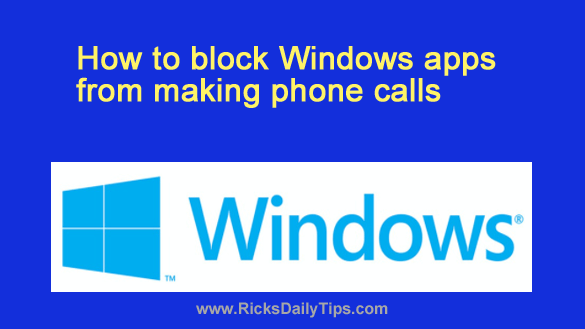 Did you know some apps that run on Windows PCs have the ability to use your phone to make calls without you even knowing about it?

Well, it’s true. If you have a smartphone linked to your Windows PC, the permissions for some of the apps that are currently installed on your computer might allow them to place calls via your linked phone without you even knowing about it.

This is one of the many reasons why it’s important to always read the list of permissions that are granted to the apps you install before you actually install them.

Of course there are certain types of apps that actually need the ability to place calls on their own, but those apps are few and far between. And if you actually use an app that has phone call privileges you’ll likely know about it.

The thing is, most folks will never need to use an app that actually needs to place phone calls all on its own.

If you fall into that group (and you probably do), you can easily block every Microsoft Store app that’s installed on your PC from using your phone to make calls in one fell swoop. Here’s how:

3 – You should now have the “Phone calls” Settings dialog open on your screen.

If your PC is running Windows 11, toggle the “Let apps make phone calls” setting to Off.

If your PC is running Windows 10, toggle the “Allow apps to make phone calls” setting to Off.

That’s all there is to it. From now on every Microsoft Store app that’s installed on your Windows PC will be blocked from placing phone calls via your linked smartphone.

But guess what? The setting you just changed only applies to apps that are available from the Microsoft Store.

If you have any third-party apps that have phone call permission you’ll have to go into each app’s settings to revoke that permission.

This is yet another reason why it’s best to only install apps that you really need, and only install them after you have read and understand the permissions they are granted.

That way you can choose to either go into the app’s settings and revoke its phone call permission or simply decide not to install the app.