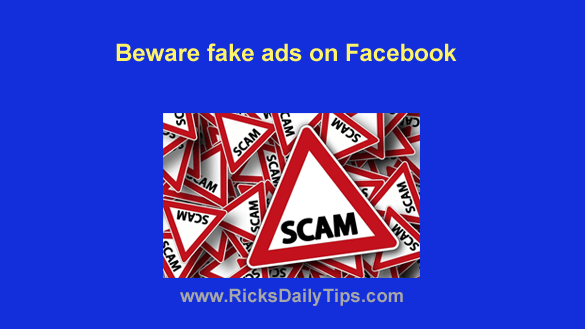 As you probably know, Facebook earns the vast majority of their revenue from ads.

And I’m sure you’ve probably noticed that they’re everywhere.

Some scammers are now taking advantage of Facebook’s advertising potential by posting fake ads that are designed to steal your money, your personal information, or both.

Most fake ads will show up in your Newsfeed just like the legitimate “Sponsored” posts that we’re all used to seeing. They just won’t have the word “Sponsored” above them.

If you see something that appears to be an ad but you don’t see the word “Sponsored” above it, you can be 100% certain that it’s a scam.

Other fake ads might show up in the regular advertising section of the sidebar if they were placed via Facebook’s self-serve ad platform.

Without exception, ALL legitimate ads on Facebook will be marked with the word “Sponsored”. Every one of them.

But just because an ad bears the “Sponsored” designation that doesn’t necessarily mean the ad isn’t fraudulent. It simply means the person who posted it is paying Facebook to display it.

Truth be told, Facebook does a poor job at vetting fraudulent ads and blocking them be fore they go live.

As always, if an offer sounds to good to be true, it probably is. And if it’s on Facebook you can place those odds at pretty close to 100%.

If you happen to click or tap on a “bad” ad you’ll probably be taken to a fraudulent website designed to steal your personal information and credit/debit card info. And it’ll probably download malware on your device as well.

Bottom line: Always evaluate any ad you see on Facebook with a healthy dose of skepticism, especially the ones that are displayed in your Newsfeed.

And yes, that does include the ads that are clearly marked as “Sponsored”.

What’s more, you can safely assume that any ads that aren’t marked as “Sponsored” are fake without even having to think about it.

Carefully analyze exactly what the ad is offering. Does it make sense for the company from a business standpoint? If not, the “offer” is probably a scam.

If you have even the slightest doubt about the legitimacy of an ad, don’t click or tap on it.

Simply visiting a malicious web page could result in malware being downloaded onto your device, and that’s a headache you can live without.