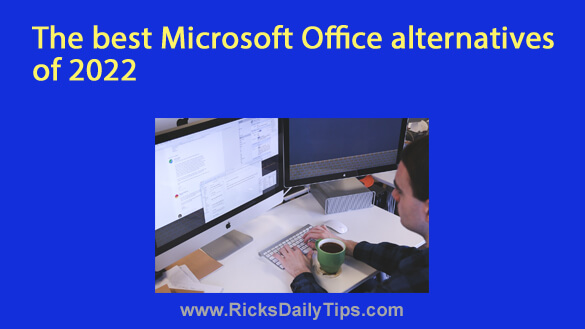 Microsoft Office, for years now, has been the best office software used in creating and editing documents, spreadsheet for calculation and arranging of data, and an established presentation used to view different slideshows during a presentation for people of diverse occupations: students, teachers, businessmen, and women.

WPS office stands for word-presentation-spreadsheet, a software established in 1988 by Chinese developers named Kingsoft. It was first created as just a word processor, but four years later, it became software for presentations and spreadsheets.

Currently, it is an all-in-one office suite and has a lot of features in them. It is the best alternative to Microsoft Office because it is also a licensed software, allowing end users the right to one or more copies of the documents without violating copyrights. Here are a few key facts:

LibreOffice is a software launched in January 2011 by Marco Borries, and since then, LibreOffice has been an alternative to Microsoft Office because they offer the same help.

LibreOffice compiles a Presentation app called Impress, a Spreadsheet editor known as Calc, Word-processor called Writer, and Database management called Base. Below are the incredible features found in LibreOffice:

It launched in 2009, and since then, it has been on the list of MS office suite alternatives. Here are some features that make Zoho so unique and an alternative to Microsoft Office:

Calligra is an office all-in-one and a graphic art suite that was launched in May 2020 by KDE. The all-in-one package of spreadsheets, presentations, databases, word processors, and the like. It is a debatable alternative to Microsoft Office because of the following features:

Google has been a versatile software that has created over twenty software and Workspace seems to be part of it. Google Workspace was created by Google in February 2006 as a suite for Gmail domains but later launched into an App and software.

It was made to make the collaboration of files easy and effective and it has been the best Microsoft Office education. It has diverse features that have helped it amongst its competitors:

MS Office has been in use for years by various people and companies, but now, another office suite has been made to perform the same tasks as Microsoft Office. It all depends on the software the person can use efficiently and what seems right for the user.