You are here: Home / Tech Questions & Answers / Q&A: What does a wireless router’s ‘Beamforming’ feature do?
547
SHARES
ShareTweetSubscribe 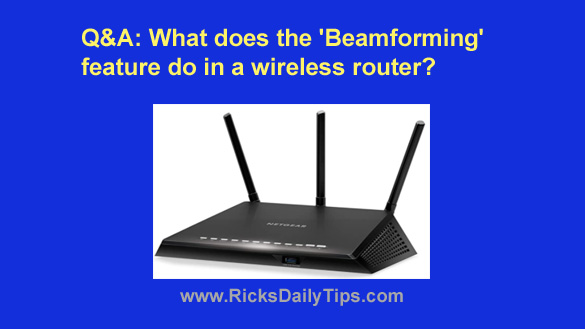 Question from Audrey:  I’ve been needing a new wireless router for a while now and I recently began shopping online for one.

I’m pretty tech-savvy and I thought I was fairly knowledgeable about routers but there’s a term that I keep seeing that I’d never heard of before.

A lot of the wireless routers on Amazon have something called “Beamforming”.

Can you tell me exactly what that is? And do you think I need it?

Rick’s answer:  That’s a great question, Audrey. And the short answer to your second question is yes, you do need it!

Now that the easy part is out of the way, I’ll do my best to answer your first question…

Traditionally, wireless routers have operated much like the transmitter of a radio station in how they transmitted their radio signals.

The antenna would transmit the signal in a circular fashion so that any device within signal range would receive the router’s WiFi signal regardless of where the device happened to me.

If a device was with the router’s range it would receive the WiFi signal (barring external factors such as walls, floors, ceilings, etc.).

That was great because a device could access the WiFi connection from any direction.

But there’s a problem with that scenario…

Since the WiFi signal is transmitted in every direction with equal strength that means the signal that’s directed towards areas in which there are no devices to use it is effectively wasted.

What’s more, any devices located on (or near) the outer edge of the WiFi signal footprint would have trouble initiating and maintaining a usable WiFi connection even though the router was transmitting a strong signal from the antenna.

Beamforming fixes that problem by determining where a user’s device is located and sending a stronger signal in that particular direction while reducing the strength of the signal sent in other directions.

In other words, a beam of strong WiFi signal is sent directly to a device while transmitting a weaker signal to areas where no devices are present.

Modern AC routers that support Beamforming can send multiple beams of signal to multiple devices, enhancing the connectivity of all users (up to the number of concurrent users the router can handle).

What all of this boils down to is your router can use Beamforming to provide a strong WiFi signal to devices in the far reaches of your home or yard without wasting a lot of available signal by transmitting it to areas where it isn’t needed.

Now that we have that basic explanation out of the way, here’s a bit of extra info that might come in handy…

Although limited forms of Beamforming was available in some of the most recent N-class routers, the technology became truly useful when the newer AC-class routers were developed.

In addition to regular Beamforming, some routers also come with an advanced form of Beamforming that will attempt to determine the location of older devices that don’t support Beamforming and send a beam of stronger signal to them as well.

Different router manufacturers call this enhanced form of Beamforming different things, but they all mean the same thing.

Personally I use and recommend Netgear routers and they call this feature Beamforming+.

Bottom line: I do recommend that you choose a router that supports Beamforming. And if you were to ask me to recommend a specific brand I would recommend a Netgear router with Beamforming+.